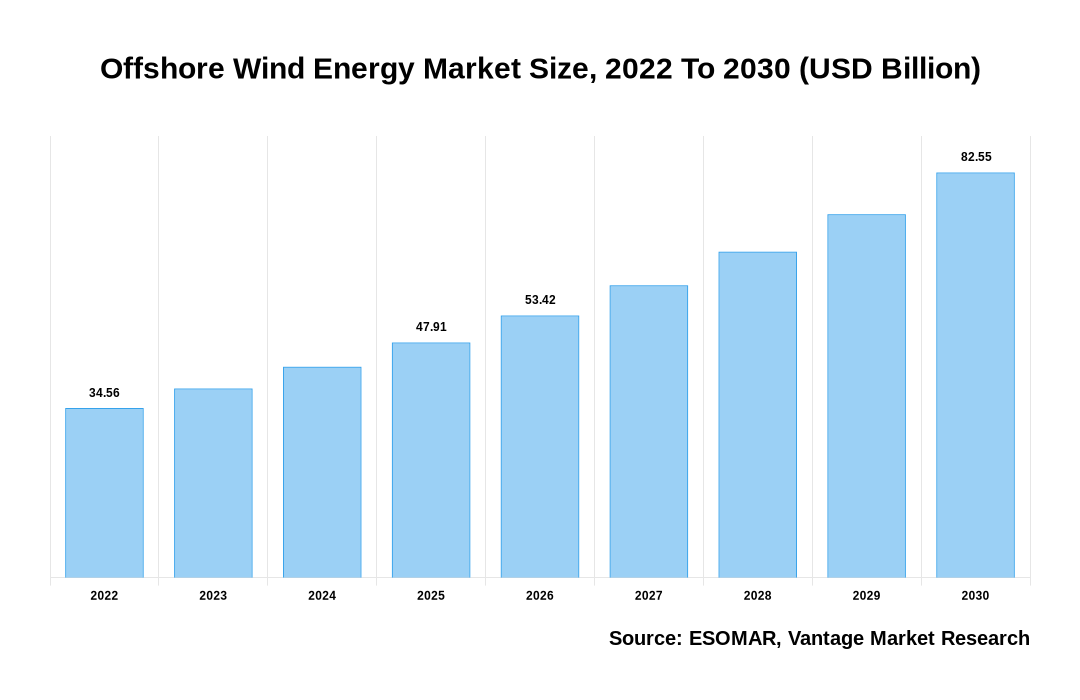 The Global Offshore Wind Energy Market is valued at USD 31.2 Billion in the year 2021 and is projected to reach a value of USD 60.9 Billion by the year 2028. The Global Market is forecasted to grow exhibiting a Compound Annual Growth Rate (CAGR) of 11.8% over the forecast period.

Offshore Wind Energy, often known as offshore wind power, is the harvesting of wind energy for electricity generation from wind farms built off the coast or on the continental shelf. Inshore water areas, such as fjords, lakes, and protected coastal areas, use fixed bottom wind turbines, while Deepwater locations use floating wind turbines. Due to the implementation of rigorous environmental rules, the market will continue to migrate away from traditional energy sources and toward renewable energy technology.

Product penetration will be influenced by increasing offshore prospects and the development of a strong commercial and industrial sector basis. During the forecast period, favorable government regulations increased investment in forthcoming offshore wind power projects, and lower wind energy costs, which have led to higher use of wind energy, are projected to boost the Offshore Wind Energy Market. However, a key factor predicted to hinder the market throughout the projection period is the transportation of heavy and massive equipment to offshore locations, resulting in high costs for offshore wind power systems.

Offshore Wind Energy is one of the most promising and environmentally benign energy generation technologies available. Its high capital cost prohibits it from being implemented, despite its high-capacity factor when compared to similar technologies like solar and onshore wind. Offshore wind turbines are prone to erosion since they operate in severe marine environments for decades. Even the most favorable characteristics, such as high wind speeds, can become a disadvantage for offshore wind turbines. When the wind speed exceeds 25 m/s, the turbines, for example, tend to shut down. As the size of offshore wind farms has become larger, so have the obstacles of construction, transportation, installation, and operation.

Logistics challenges are more difficult to overcome in offshore wind farms in general. Wind farms are typically placed far from the shore and difficult to reach, particularly in inclement weather. As a result, even the simplest technical issue could be difficult and costly to resolve. Other difficult aspects of offshore wind deployment include resource characterization, grid connections and operation, and transmission infrastructure development, all of which are significantly easier in other technologies like solar and onshore wind. As a result, the worldwide Offshore Wind Energy Market is constrained by high capital expenditures and challenges related to operations, maintenance, transportation, and logistics.

Based on Power Output:

In 2021, the market was led by the turbine segment. Turbines are mounted on the tower and are responsible for collecting wind energy to generate electricity. The electrical infrastructure business grew in popularity as a result of rapid technological breakthroughs and a shift in attention to the development of hybrid units to support long-distance electrical transmission. Far-off projects and complicated electrical systems, on the other hand, have extremely high overall project costs. In addition, tremendous energy extraction potential will aid industry leaders in maximizing the enormous resource portfolio in the next few years.

The Global Market for Offshore Wind Energy is led by Shallow type of location, which is likely to maintain its lead during the forecast period. This is where the majority of initiatives are undertaken. This portion is recommended for the building of an offshore wine vineyard because of the less demanding weather and ease of upkeep. In addition, installing electrical infrastructure in shallow water is easier than installing a wind turbine. Due to the lower wind speed available in shallow water, turbines with lower MW capacities are erected in this area.

Europe is acquiring the largest market share with a share of 37.90%. Around 85% of all offshore wind installations are located in European waters. The governments of Europe, notably those in the North Sea region, have set an ambitious goal for offshore wind farm installation in their respective territorial waters. Siemens (Germany), Nordex SE (Germany), Vestas (Denmark), ABB (Switzerland), and others are among the leading offshore wind firms in Europe. Offshore wind technologies and offshore wind farm development have been pioneered in the European region. The European Wind Initiative (EWI), a wind energy Research and Development (R&D) initiative created to take Europe's wind industry to the next level, is supporting the development of offshore wind energy. The EU countries are largely focused on rebuilding their old electrical infrastructure, and their governments are supporting renewable energy generation and establishing networks to allow for efficient power and energy trading.

Offshore Wind Energy Market to Reach Valuation of USD 60.9 Billion by 2028 - Chronic diseases are becoming more common to Drive the Market Growth
From the period of 2022 to 2028, the Global Offshore Wind Energy Market is expected to reach USD 60.9 Billion in terms of revenue, growing at a Compound Annual Growth Rate (CAGR) of 11.8%. Enterprise resource planning (ERP) in healthcare has become a significant component of the worldwide healthca...
Read More

What is the global demand for Offshore Wind Energy in terms of revenue?