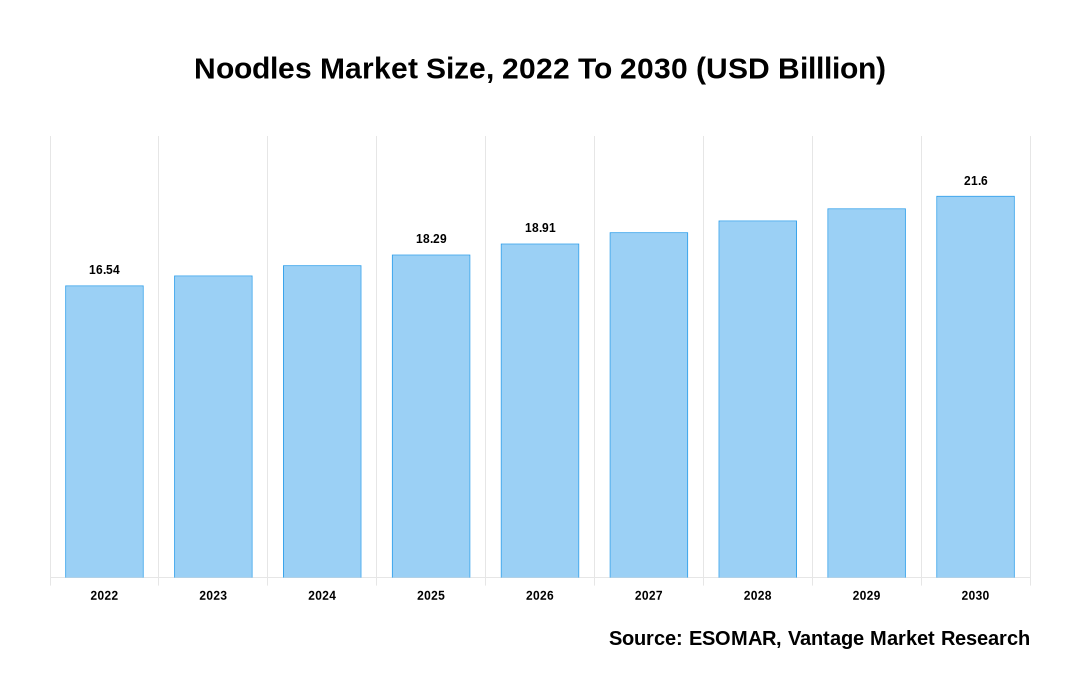 The Global Noodles Market is valued at USD 16.5 Billlion in the year 2021 and is projected to reach a value of USD 20.2 Billlion by the year 2028. The Global Market is expected to exhibit a Compound Annual Growth Rate (CAGR) of 3.5% over the forecast period.

Noodles are a type of food made from unleavened dough that is flattened and cut, expanded, or extruded into long strips or strings. Noodles can be kept in the refrigerator for a short period of time or dried and stored for later use. In India, the consumption of packaged food products such as instant Noodles is being driven by a growing millennial population and an increase in working-class customers. Furthermore, the companies have recently introduced a number of products that stand out in terms of new flavors, healthy ingredients, and packaging. Consumption of instant Noodles has increased significantly in recent years as a result of these factors.

Due to people’s hectic work schedules, there is a growing demand for ready-to-eat food products that are easy to prepare and consume without interfering with their daily activities. As a result, customers have embraced convenient food products, which offer a variety of benefits such as quick appetizers, longer shelf life, and greater accessibility in the global economy. These Noodles are among the most popular snacks among consumers. They are gaining significant traction in the global market, which will contribute to growth over the forecast period. The incorporation of organic supplements, along with added functionalities such as longer shelf life and a broader product selection, will open up new market revenue opportunities for the global instant Noodles Market. Increased reliance on home-cooked meals by the middle class will drive sales in the global instant Noodles Market even higher.

On the basis of Type, the market is segmented into Cup Noodles , Fried Noodles , Frozen Noodles , Instant Noodles , Rice Noodles , Egg Noodles , Others. Cup/bowl Noodles are becoming increasingly popular among consumers due to their ease of preparation and ready-to-eat nature. As the market's demand for it grows, the market's major players have introduced it. It is also gaining popularity due to its convenient packaging, ease of preparation, and good taste when compared to packet Noodles . The growing urbanization, the hectic schedule, and the ease of consumption are the primary drivers of the Indian instant Noodles Market.

Based on Distribution Channel

On the basis of Distribution Channel, the market is segmented into Supermarkets and Hypermarkets, Convenience Stores, Specialist Retailers, Online Stores, Others. Supermarkets/hypermarkets are the primary channels of distribution for instant Noodles in urban areas. People in cities prefer to buy instant Noodles in addition to their regular groceries. The ease of access to these supermarkets/hypermarkets is also a major factor driving instant noodle sales through this channel. Due to changing customer preferences, players introduce new varieties in the market; supermarkets ensure that all of these products are available in order to attract more customers. Supermarkets/Hypermarkets are the second largest distribution channel, trailing only traditional grocery stores.

Asia Pacific holds the largest market share during the year 2021 with a share of 39.70%. The Asia Pacific market's growth is being driven by a large consumer base and rising disposable incomes, which allow them to spend on a wide range of food items in market scenarios. In order to avoid barriers in their busy lives and increase general well-being, consumers in the region have indicated a readiness to spend more on convenience food products. These Noodles are one of the most popular convenience foods, and their popularity is growing rapidly in the region's densely populated countries like China, Indonesia, and India. The product's consumption in China has increased dramatically as a result of investments and innovations by key players in the country. The growing working population, dynamic youth groups, and an increasing number of female workers. Some of the major factors that are likely to boost product consumption in the market are the growing working population, dynamic youth groups, and an increasing number of females working population.

Noodles Market to Reach Valuation of USD 20.2 Billlion by 2028 - Increasing Demand for ready-to-eat products to Drive the Market Growth
From the period 2022 to 2028, the Global Noodles Market is expected to reach USD 20.2 Billlion in terms of revenue, growing at a Compound Annual Growth Rate (CAGR) of 3.5%. People's hectic work schedules are driving the demand for ready-to-eat food products that are quick to prepare and consume wi...
Read More

What is the global demand for Noodles in terms of revenue?