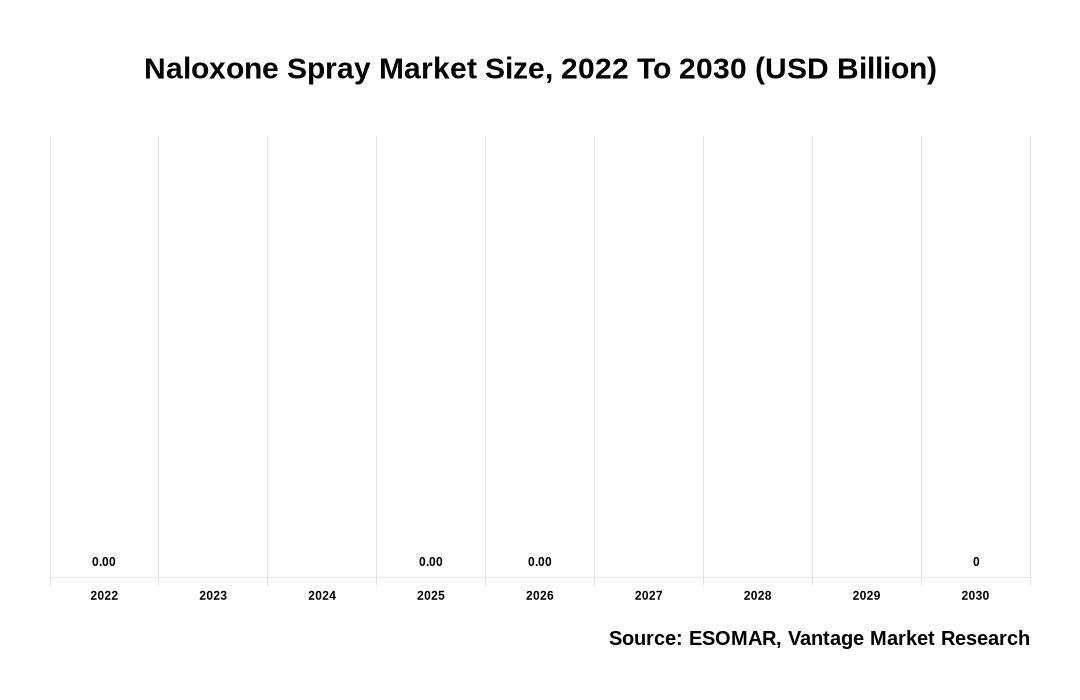 Global Naloxone Spray market is valued at USD 0.32 Billion in 2021 and is projected to attain a value of USD 1.94 Billion by 2028 at a CAGR of 20.1% during the forecast period, 2022–2028. Naloxone Spray is used to treat opioid overdose symptoms such as respiratory issues, extreme tiredness, and inability to respond. Naloxone Spray is used to temporarily reverse the effects of opioid medications. People who have never been exposed to opioid drugs are unaffected by the medicine in this nasal Spray. After administering the first dose of nasal spray, the patient requires immediate medical attention. Approximately 400,000 people died as a result of an opioid overdose between 1999 and 2017, according to the Centers for Disease Control and Prevention. In addition, approximately 130 people die in America every day as a result of opioid overdoses, which include prescription pharmaceuticals such as oxycodone, fentanyl, morphine, and hydrocodone, as well as illegal substances such as heroin or drugs sold as heroin.

Launches and Approval of New Spray

Increased launches and approvals of novel Naloxone Spray products are expected to be a major factor in the market's growth in the future years. Pfizer, a large pharmaceutical manufacturer, for example, announced a generic naloxone nasal spray in April 2020, which is projected to dramatically boost market demand. In addition, as the number of opioid overdoses rises, efforts are being made to make this emergency overdose reversal drug more readily available and accessible to those who may need it. The FDA has also taken the extraordinary step of supporting manufacturers in obtaining FDA approval for an over-the-counter Naloxone Spray product, and is looking into other options to expand the availability of naloxone medicines for community usage.

Legal Status and Availability to Law Enforcement and Emergency Personnel

There are a number of limits and limitations that will limit market expansion. With the exception of Hawaii, naloxone is apparently available without a prescription in every state in the United States. In actuality, not all pharmacies have naloxone on hand or can dispense it. Because naloxone is still considered a prescription-only drug under FDA standards, a pharmacist may be required to write a prescription or may not be permitted to administer it, depending on the pharmacy. As naloxone is a fairly new product, the high cost associated with this product coupled with the serious side-effects may create hindrances in the market growth.

In 2021, North America held the greatest proportion of the global market for Naloxone Spray, followed by Europe. The United States is the largest market in North America, with high rates of opioid overdose and an increasing number of victims addicted to opioids and morphine. Furthermore, the country is in the midst of an epidemic, as the number of deaths increased by 21% in 2016. In 2017, the US Federal Government declared the opioid crisis a Public Health Emergency, which is projected to fuel future market growth. Teva Pharmaceutical Industries Ltd. was given approval by the US Food and Drug Administration on Friday to launch generic naloxone nasal spray to treat opioid overdoses in April 2020.

The Naloxone Spray market is segmented as follows:

What is the global demand for Naloxone Spray in terms of revenue?