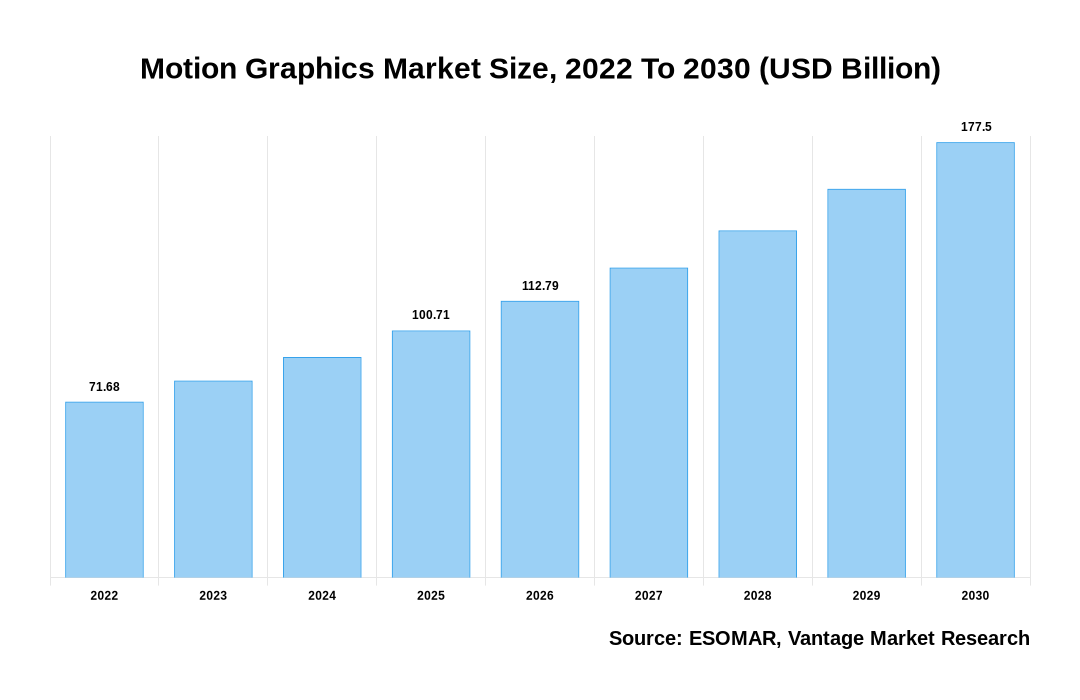 The Global Motion Graphics Market was valued USD 64.3 Billion in the year 2021 and is anticipated to reach a value of USD 129.1 Billion by the year 2028. The Global Market is forecasted to grow to exhibit a Compound Annual Growth Rate (CAGR) of 12.3% over the forecast period.

Motion Graphics are attractive and incredibly adaptable storytelling tools, which offers them a fantastic supplement to a brand's content marketing mix if they want to engage customers on social media, tell an intriguing tale quickly, or describe their product. The sector is also benefited from the ongoing developments in infographics technology, which are encouraging an increasing number of people to work in the field of motion graphics. Additionally, combining 2D and 3D is becoming more popular because viewers adore how a video tells a tale when 2D and 3D visuals are used.

Some instances include integrating 2D over-layers with motion and fusing 2D and 3D animation. This trend may be seen in both high-budget and small-scale digital advertisements. Additionally, it is estimated that the rising popularity of online and multiplayer gaming would give players in the graphics sector numerous opportunities. The development of artificial intelligence and virtual reality technology is thought to provide the push for the coming industrial revolution.

Growth will be further fueled by increased market rivalry driven by the daily appearance of new businesses, particularly in developing nations. More money invested in the animation sector, the popularity of animated television shows and movies, and children's growing love of video games are some more factors supporting the expansion. On the other hand, the trend of people streaming videos online rather than renting movies will further slow growth.

Based on End Users:

Most modern movies use 3D and CGI technology, which has caused tremendous development. To make its films more realistic, Hollywood is now embracing 3D technology to produce a variety of costumes, props, and items. By putting all the pieces together, 3D modeling in construction offers a realistic depiction of a project that has been completed.

Based on Graphics Type:

The animation segment holds a significant share in the market over the upcoming years. The primary catalyst for the expansion of the animation market will be the increased accessibility of animated tools. Additional factors supporting the development of the animation market include increased investment in the sector, an increase in the popularity of animated television shows & movies, and children's growing love of video games.

North America Holds the Largest Share during the Forecast Period:

North America is estimated to show lucrative growth in the market during the forecast period. The region's growing entertainment sector, combined with its dominance of the animation business, will allow it to increase its market share over the forecast period. Additionally, the adoption of more immersive content will increase, which will be a critical factor in determining market growth. The market is expected to have a wide range of potential opportunities due to the region's growing use of new technologies and the presence of crucial players. Additionally, a sizable portion of the region's millennial population has embraced the video, and photo animation trends shared on platforms like YouTube, Facebook, etc., which has increased the region's sales of motion graphics. Additionally, a significant driver in the region's expanding industry is the growing preference of such firms for creative visuals in the form of images and videos to deliver content to visitors. Also, the number of telecom operators for custom movies, animations, and customized Motion Graphics has resulted from the region's expanding television sector, attracting many customers.

Motion Graphics Market to Reach Valuation of USD 129.1 Billion by 2028 – IncreasingAdvancement in Entertainment Industry Drives the Market
In terms of revenue, the Global Motion Graphics Market is expected to reach USD 129.1 Billion by 2028, growing at a Compound Annual Growth Rate (CAGR) of 12.3% from 2022 to 2028. Factors such as the sudden rise in advertisements & other promotional videos and the increasing need to create an illus...
Read More

What is the global demand for Motion Graphics in terms of revenue?