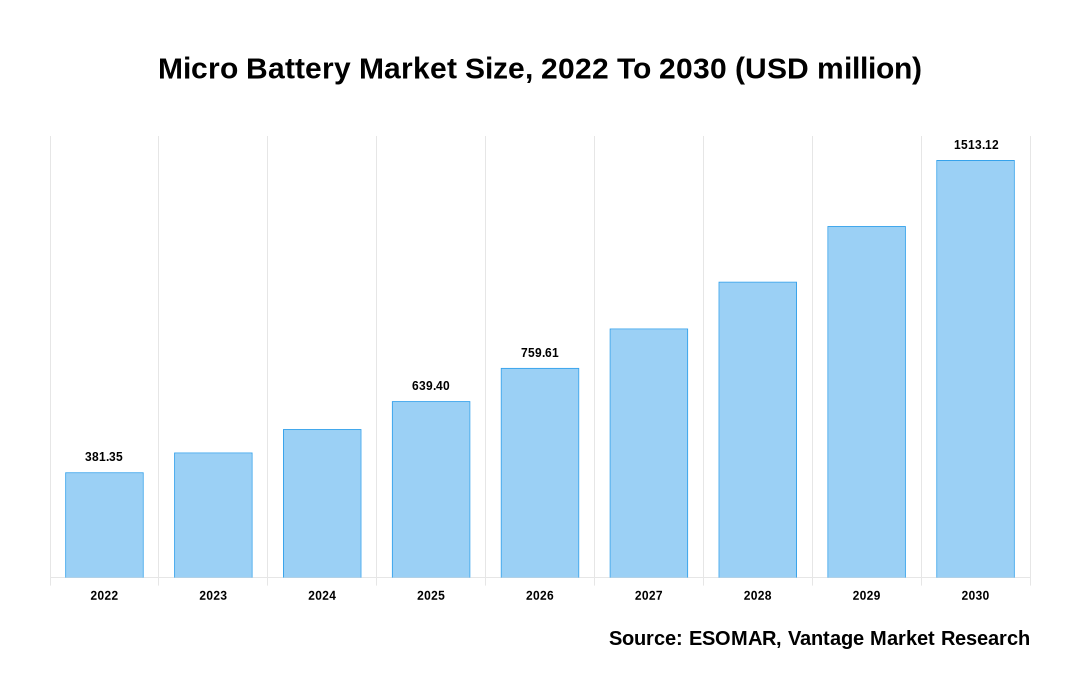 Micro batteries range in size from 5 mm to 11.5 mm in diameter, but they generally have a flat shape, with the exception of some cylindrical models. They are used in many toys and devices where a regular battery is too big or does not fit. A good example would be remote-controlled cars which use these especially small batteries. Another famous toy that uses these is a mini-Lego car which runs on a single Micro Battery. In addition to small devices, micro batteries are also used in larger ones as well. These types of batteries power the Nintendo DS and Sony PSP handheld consoles. They can provide power to run applications on both systems for 30+ hours before needing a recharge. Micro batteries are often used in watches and hearing aids as well.

The rapid growth in the demand for Internet of Things (IoT) devices is one of the prime factors driving the global Micro Battery market. The new applications are developing with an aim to fulfill various requirements of industries, which is further expected to create significant opportunities for the market players during the forecast period. For instance, recently Moxia Technology, a Taiwan-based provider of wireless modules, launched different battery packs for IoT devices. These battery packs are integrated with Bluetooth service and offer mobile device compatibility, which is expected to provide significant growth opportunities for the Micro Battery market in the near future. The other factors driving the growth of this market include rise in number of smart wearable electronics products, increased penetration of smartphones and smart devices, and applications in IoT.

However, the limited shelf life is a major factor restraining the growth of Micro Battery market. The other factors restraining the growth in this market include high cost associated with wireless charging system and low capacity for storage or power generation. Some of the devices using micro batteries are wearable devices such as wristwatch, smart watches, fitness band, smart glasses, and head-mounted displays. A new trend gaining momentum in the market is the wireless charging technology.

Micro Battery is commonly used in general electronics products to provide power for short time periods(milliseconds) with discharge current range from 1-10A, its core usage is in watches, small toys, GPS navigator, digital camera, in-car audio system and other portable electronic devices. Today, they have become a distinguishing feature of hand-held gadgets. There is no way to make gadget even smaller without having a battery at the same time. After all, these devices are designed to make their presence known in pockets.

Solid state batteries are viewed as one of the most promising technologies for future energy storage devices. Estimates suggest that by 2025, less than 15% of all storage capacity will be based on flammable liquids or compressed gases. The remaining units will either be pumped hydro (20-25%) or solid-state batteries (more than 65%). This is the market share expected for this new technology in less than ten years, and most industry experts agree that solid state batteries will eventually replace lithium-ion (LIB) as well.

The key factor driving demand for solid state batteries is their ability to store much more power in a smaller volume. This means that future gadgets will have particularly compact designs, while large amounts of stored energy could be fitted into small spaces.

Asia-Pacific is projected to be the largest market for thin film, printed, solid state chip and button battery during the forecast period. The developing countries of this region are rapidly growing with an increase in disposable incomes and higher consumer spending on technologically advanced products which is driving the demand for new applications across various industry verticals. Many electronic appliances manufacturers and consumer product companies are focusing on enhancing their business and customer base in this region through appropriate marketing and distribution strategies.

These factors are expected to drive the market growth for thin-film, printed, solid state chip, and button battery during forecast period. The regional growth is further supported by the presence of a large number of players and investments by foreign companies for manufacturing new types of batteries. However, the stringent policies and regulations regarding various environmental concerns such as recycling and disposal are expected to restrain the market growth during forecast period.

What is the global demand for Micro Battery in terms of revenue?