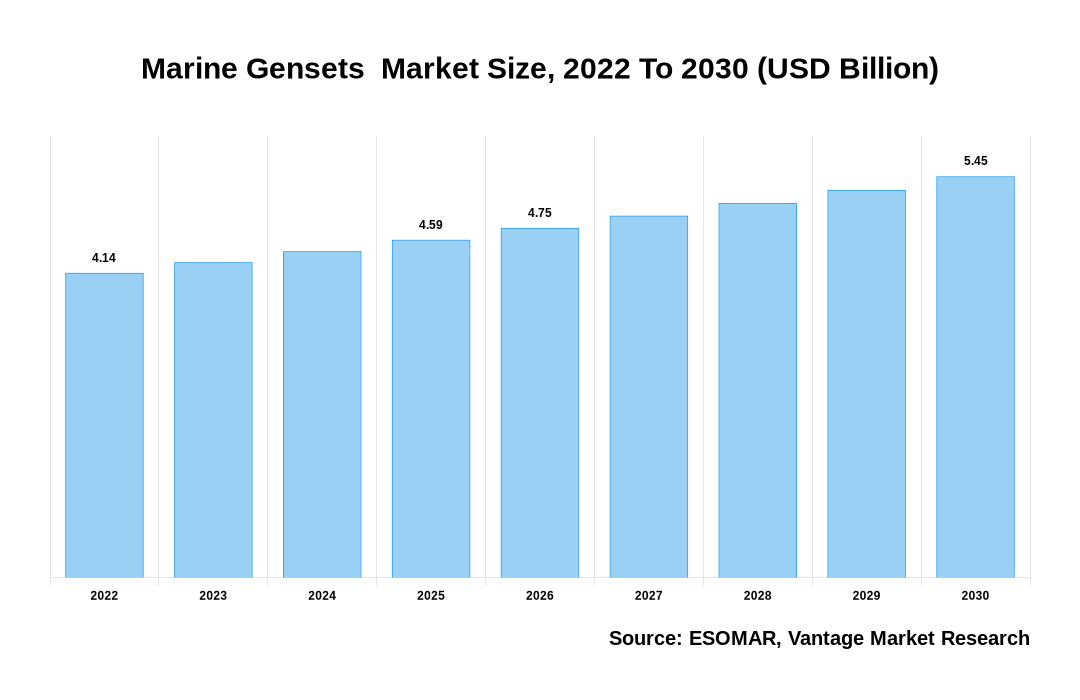 Global Marine Gensets market is valued at USD 4.46 Billion in 2021 and is projected to attain a value of USD 5.76 Billion by 2028 at a CAGR of 3.7% during the forecast period, 2022–2028.The initial focus on the vessel propulsion engine system has led to the growing use of auxiliary engines in many different vessel processes, which in turn is fueling the demand for gensets. Growth of this industry is also being driven by new, more stringent environmental regulations from organizations such as IMO and MARPOL which mandate the use of auxiliary engines that are cleaner burning and have lower emissions. In addition, increasing globalization of world trade has led to a rise in the amount of cargo transported via waterway transport, resulting in a higher demand for vessels equipped with gensets.

High price of conventionally sourced fuels such as diesel, along with increasing awareness about environmental issues surrounding the usage of fossil fuel-based energy sources is likely to boost demand for these services. As a result, many countries seek alternative and efficient sources of energy generation that can help them reduce their dependence on conventional fuel-based utilities. Marine Gensets can help ship owners meet this objective by reducing their electricity bills. Alternative fuel research activities are gaining pace in the world, which is likely to drive growth of this market. For instance, according to International Energy Agency (IEA), global energy consumption from alternative fuels will increase by 80% between 2010 and 2040. This figure includes biofuels use, hybrid electric vehicles, plug-in electric vehicles, hydrogen cell technologies, etc.

The trend of reducing hazardous emissions is expected to continue over the next five years; therefore; end users may become more cautious about harmful emissions released during the operation of marine generators. Consequently, manufacturers will innovate sustainable technologies such as ecofriendly diesel engines to reduce environmental impacts.

The market for marine generators is witnessing a high adoption in fishing vessels and shipping vessels. The need to provide power for onboard equipment such as winches, cranes, compressors are driving the demand. The overall market growth is primarily driven by factors such as increasing fleet size of commercial vessels and replacement of diesel generator sets to comply with international environmental regulations. The overall market is driven by the increasing need to power onboard equipment such as winches, cranes and compressor and stringent emission rules and regulations. The fishing industry has always been a very capital-intensive industry and any type of input rise in operational cost is highly resisted. Marine generator setsare adopted due to its lower fuel consumption and reduced carbon dioxide emission offered by the technology which helps fisherfolk meet their business targets as well as environmental concerns.

Emerging economies in Asia Pacific have high economic growth potential due to growing demand for manufactured goods. Countries such as China and India have an increasing number of shipyards that manufacture vessels used on inland waterways or sea routes. These countries usually do not have access to conventional power generators that work on diesel-based engines because docked ships exposed to damage due to factors such as winter weather conditions. Countries, such as China and India, are focusing on developing their shipbuilding industry to meet rising demands for new vessels from local countries and also cater to the export market. Therefore, companies focus on manufacturing cost-effective Marine Gensets that can provide adequate power required by these ships. Furthermore, growing number of offshore projects in these countries, such as oil and gas exploration activities, will also boost demand for Marine Gensets over the next few years.

The Marine Gensets is Segmented as Follows:

What is the global demand for Marine Gensets in terms of revenue?