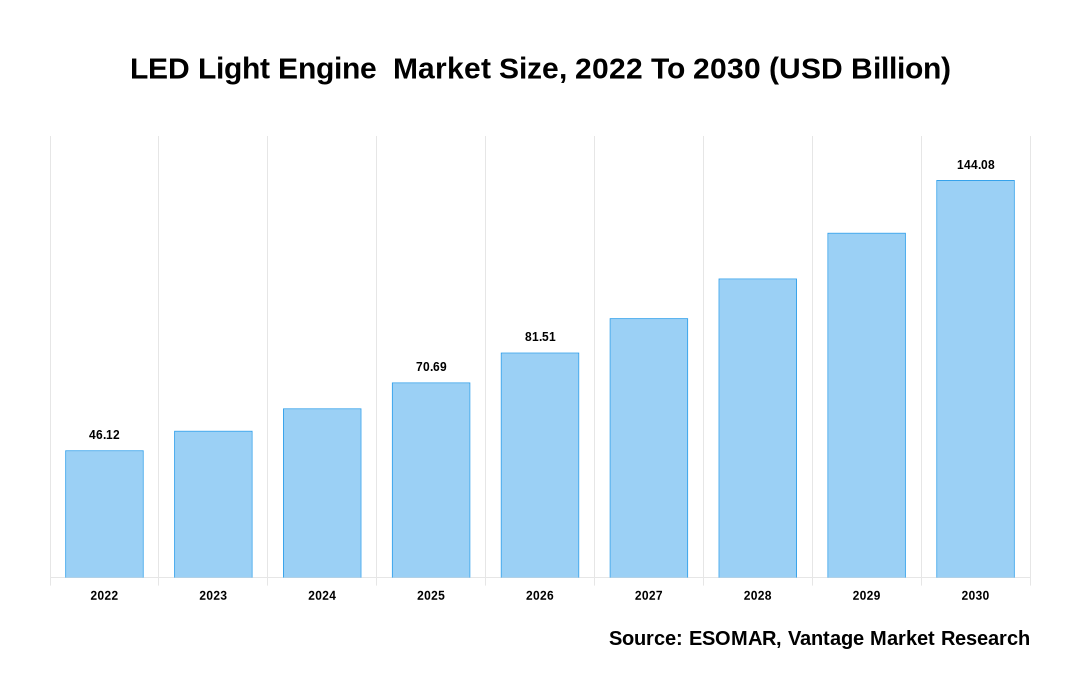 Global LED Light Engine market is valued at USD 40.09 Billion in 2021 and is projected to attain a value of USD 110.60 Billion by 2028 at a CAGR of 15.6% during the forecast period, 2022–2028. In the last few years, the global LED Light Engine market has witnessed a considerable growth. This can be attributed to easy availability of a greater number of efficient and reliable LEDs, reduction in cost per lumen, reduction in size, weight and power, and rapidly advancing optical materials. The growth is further supported by advances in manufacturing technologies such as high-speed surface mount technology (SMT) assembly machines/equipment and lead-free solder that can meet stringent environmental regulations worldwide.

With its high efficacy and good color rendering, white LED Light Engine s are widely used in household lighting and automotive applications. According to semiconductor industry association statistics, in 2021, the market share of high-power LED is 48% in total output value in the world and it still has a very large room for growth. Today, LED Light Engine s are widely used in home lighting applications such as lamps, towers and display cabinets. Customers also use them for interior decoration to create ambient lighting effects like blurred footlights, track lights and up lighting. They can be found in houses, offices, hotels, restaurants as well as public spaces such as shopping malls, airports and bus stations etc., which means that quality requirements are very high.

It has been found that light engines are mainly used in indoor lighting, which makes it the largest consumer of the product. This is because the cost of lamps and ballasts is expensive and they produce a lot of heat so they cannot be put in close proximity to other equipment. Wherein, light engine plays a key role in reducing the energy consumption up to 50% than incandescent lights. The incandescent light bulb needs about 40W while the LED need only 10W for same range. Another important thing is that since there are no filament or glass body, there's less breakage rate which will bring down the product damage to minimum therefore increasing its life span.

In terms of durability, light engine emits a directional ray of the light from its source. In traditional incandescent lights, it used to produce an omnidirectional ray of light which eventually decreases its life span comparing with LED. In addition to that, since LEDs are operated on low voltage and high-frequency sometimes makes them more heat efficient than fluorescents while some may say dark environments is where they shine the most.

Every day, new facilities are being completed around the world. As a result, there is an increased demand for competitive LED retrofit lighting string design to replace traditional facility light strings that are typically made with fluorescent or halogen lamps. A lot of these commercial buildings are constructed without making any provisions for installation of future lighting systems, which makes them more difficult to upgrade when compared to residential facilities. Out dated facility lighting tends to be inefficient and expensive to operate since new facilities have become designed with energy efficient components/equipment in mind. Retrofitting these contemporary designs with intelligent LED lighting solutions provides many benefits including long product life, low maintenance costs, high performance levels, flexibility in indoor environmental conditions, and high color rendition index (CRI). Since the Annual cost of commercial lighting has now become one of the largest areas in utilities expenses, facility owners are now realizing that retrofitting their current lighting systems with LED light strings is much more economical than initially installing new intelligent LED lighting. Retrofit or upgrade costs can result in paybacks within 5 years depending upon varying factors such as location, operating time and usage pattern. These benefits depend upon various factors like durability, consistency of performance & lumen maintenance during product life cycle and so on.

LEDs are semiconductor-based components that convert electricity into light. LED lamps have a number of advantages over traditional incandescent and fluorescent lamps, including higher energy efficiency, longer lifetime, improved physical robustness and smaller size. Asia Pacific is the largest consumer as well as producer of LED Light Engine market because of the following reasons as more than 60% of world's population lives in this region. This factor can be attributed as an important factor for growth of LED lighting industry in Asia-Pacific region due to outdoor activities such as sports events which requires huge amount of lighting facility during night time.

The growing demand from applications across residential & commercial sectors is expected to boost the use of LEDs in Asia Pacific region. Inbound international tourists have been increasing over the period of time in Asia Pacific due to this region growing economy especially from China and Japan which will provide high growth prospects for marketers of LED Light Engine s during the forecasting period.

The LED Light Engine is Segmented as Follows:

LED Light Engine Market Expected to Reach USD 110.60 Billion by 2028
The LED Light Engine Market is expected to reach USD 110.60 Billion by 2028, growing at a Compound Annual Growth Rate (CAGR) of 15.6% between 2022 and 2028. The rising awareness among consumers regarding the conservation of energy and reducing prices of LED lights is anticipated to fuel the LED ligh...
Read More

What is the global demand for LED Light Engine in terms of revenue?