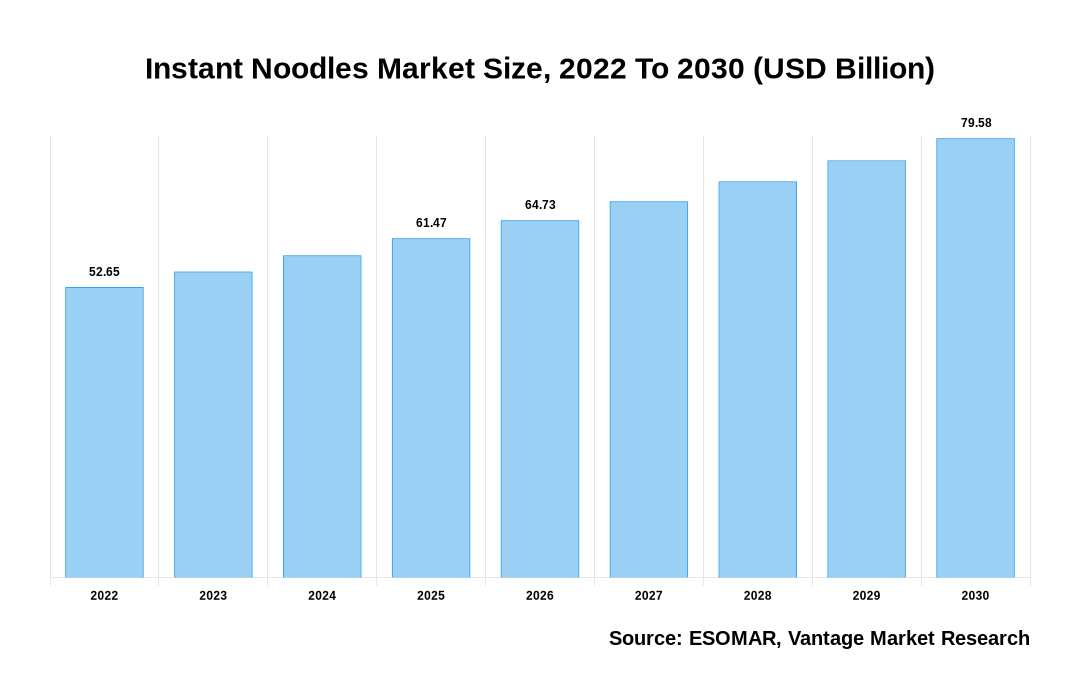 The Global Instant Noodles Market was valued at USD 50.7 Billion in 2021 and is forecast to reach a value of USD 69.9 Billion by 2028. The Global Market is anticipated to expand by exhibiting a Compound Annual Growth Rate (CAGR) of 5.5% over the forecast period.

Refined wheat flour and an assortment of alkaline salts are the main ingredients in instant noodles. The dough is also supplemented with several other components in smaller amounts, including starch, edible oil, gluten, and stabilizers such as guar gum. Instant Noodles are precooked dry noodles dehydrated using either the flash-frying method or the air-frying method. Typically, they come with a tiny sachet containing the tastemaker. Since they are portable, quick to prepare, and easy to store, Instant Noodles have grown in popularity worldwide. The demand for packaged food items like Instant Noodles in India is driven by a growing millennial population and a rise in working-class consumers. Additionally, the businesses have recently debuted several items that stand out due to their novel flavors, nutritional components, and eye-catching packaging. In India, the consumption of Instant Noodles has risen significantly over the past several years due to these causes.

The middle or lower middle class makes up a sizable portion of the population. Therefore, price sensitivity significantly contributes to the country's slowing growth of the instant noodle business. Moreover, unless they see them at their neighborhood store, most residents of rural areas are ignorant of the numerous available brands. Therefore, the absence of a solid distribution network is a problem for the Indian market for pot noodles.

Based on Distribution Channel:

Due to their ability to provide a one-stop shopping experience, Supermarkets & Hypermarkets are predicted to hold a significant market share. Due to their low & affordable cost and easy availability in numerous Supermarkets & Hypermarkets, Instant Noodles are experiencing a massive increase in popularity among customers. The growing middle class in the world is one of the key growth drivers for the industry since the product's pricing, and availability of consumer packs are within reach.

Based on Product Type:

The product has been packaged in Cups for many years, and producers are increasingly using them as flexible packaging options. As a result, cups are more secure during transportation and storage than bag packing. Additionally, the waterproof polyester material used to make the Cups makes it more convenient for customers to microwave the Cups while preparing the noodles. These advantages will probably fuel the segment's expansion.

The Asia Pacific market size topped analyses of regional instant noodle markets. The vast consumer base and their rising disposable incomes, which enable them to spend on a variety of food items in the market, are driving the region's expansion. Consumers in the area are willing to spend more on fast food and other prepared things to save time and enhance overall wellness. The most popular and widely liked One of the most popular convenience foods is instant noodles. Their demand is rising quickly in the region's densely populated nations like China, Indonesia, and India. Due to the investments and improvements made by significant local players, the product's consumption in China has dramatically expanded. Some critical elements anticipated to increase the product's consumption in the market are the expanding working population, vibrant youth groups, and an increasing number of working women.

Despite their origins in Asia, these noodles are now among the most consumed meals in North America and Europe. Due to the predicted significant growth of the convenience foods sector during the forecast period, the U.S., Russia, and Germany are the primary countries in these regions with the most significant growth potential.

Instant Noodles Market to Reach Valuation of USD 69.9 Billion by 2028 – Rising Dependence on Quickly made Meals within Optimal PricesDrivestheMarket
In terms of revenue, the Global Instant Noodles Market is expected to reach USD 69.9 Billion by 2028, growing at a Compound Annual Growth Rate (CAGR) of 5.5% from 2022 to 2028. The market leaders are introducing novel and fresher flavors, which are anticipated to increase the market size for Insta...
Read More

What is the global demand for Instant Noodles in terms of revenue?