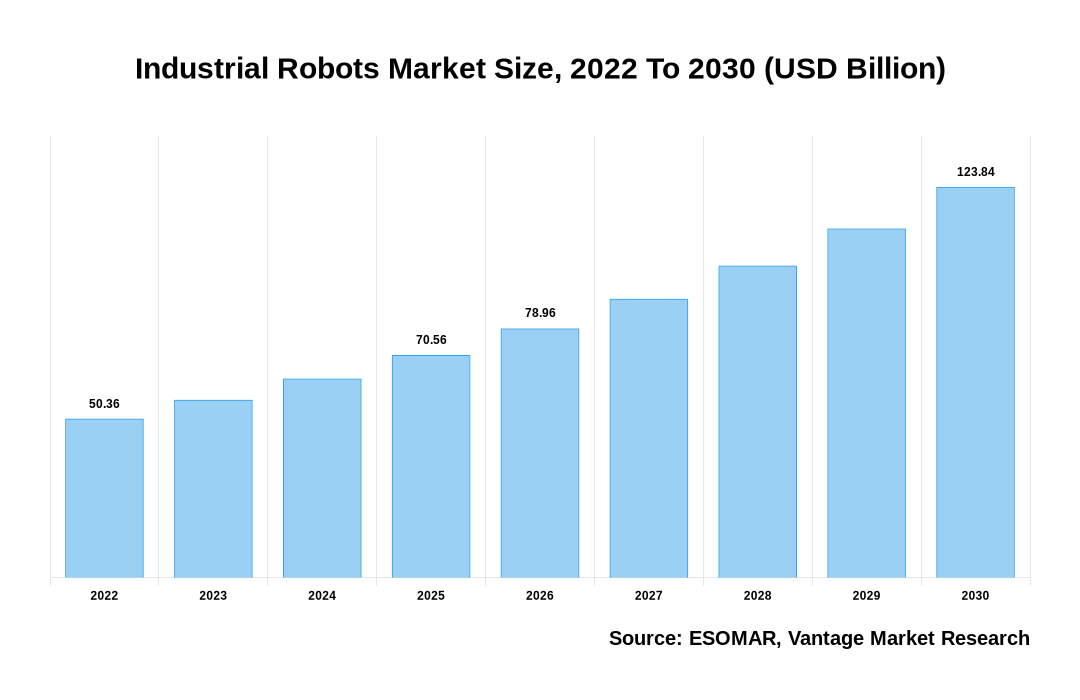 The Global Industrial Robots Market was valued at USD 45.1 Billion in the year 2021 and is forecast to reach a value of USD 89.4 Billion by the year 2028. The Global Market is anticipated to grow to exhibit a Compound Annual Growth Rate (CAGR) of 12.1% over the forecast period.

An Industrial Robots is a type of mechanical device that is programmed to carry out tasks related to industrial production automatically, and that is supplied data. Depending on the application, these robots can be programmed, and the software can be changed as often as necessary. In automation applications, these robots help increase productivity while reducing costs and producing high-quality goods. The bulk of robots consists of drives, end-effectors, robotic manipulators, sensors, and controllers.

Industrial robots are often in great demand across various sectors, including the automotive, pharmaceutical, consumer electronics, packaging, and manufacturing industries. To control industrial processes and cut expenses, they deploy a particular type of robot in all their facilities, which is the basis for this demand. For instance, players in the consumer electronics sector may install collaborative robots more quickly to increase production flexibility. As a result, significant investments are being made in the industry, promoting its expansion.

A robotic automation project could be challenging, especially for startups and inexperienced firms. A significant amount of capital is needed for the robot's purchase, integration, programming, and maintenance. In other circumstances, a unique integration can be necessary, raising the overall cost. In addition, businesses might not always have the tools and space required to use robots. Because SMEs usually produce in modest volumes, obtaining a return on investment (ROI) can be difficult.

Automation is an expensive investment for SMEs, particularly those involved in low-volume production, due to the cost of industrial robots, integration costs, and ancillary costs such as end effectors and vision systems.

Market segments for industrial robots are created based on type, component, payload, application, industry, and Region. Traditional Industrial Robots, Articulated Robots, SCARA Robots, Parallel/Delta Robots, Cartesian/Linear/Gantry Robots, Collaborative Robots, and Other Robots (Cylindrical Robots, Spherical Robots, & Swing-Arm Robots) are the segments into which the market is divided based on Type segment. The market segments based on Components include Robotic Arms, Robot Accessories, End Effectors, Controllers, Drive Units, Vision Systems, Sensors, Power Supply, and Other Components. Furthermore, based on Payload, the market is further segmented into Up to 16.00 kg, 16.01–60.00 kg, 60.01–225.00 kg, and More than 225.00 kg. In addition, based on Application, the market is further divided into Handling, Assembling & Disassembling, Welding & Soldering, Dispensing, Processing, and Other Applications. Likewise, based on Industry segment, the market is further fragmented into Handling, Automotive, Electrical & Electronics, Metals & Machinery, Plastics, Rubber, & Chemicals, Food & Beverages, Precision Engineering & Optics, Pharmaceuticals & Cosmetics, Other Industries.

The Articulated Robot segment held a substantial portion of the Industrial Robots market. This contribution is attributed mainly to consisting of applications like material handling, assembly, and others, due to its ability to repeatedly carry out precise motions. The employment of Articulated Robots is primarily found in automobiles, pharmaceuticals, and the production of food & beverages, and promoting market expansion to name a few.

Robot Accessories, End-Effectors, and Vision Systems are predicted to increase at the fastest rate among all the Industrial Robots market's Components segment for industrial robots. End-Effector development has significantly advanced as a result of technological development. The requirement to acquire dexterous manipulation in industrial robots for increased performance, particularly in pick-and-place tasks, has contributed to these breakthroughs in end-effectors. Furthermore, as machine learning software, safety features, and the ability to adapt to their surroundings via machine vision are progressively included in End of Arm Tools (EOAT), end-effectors are anticipated to become more technically complex.

In terms of value and volume, Asia Pacific will account for the most significant portion of the market for conventional industrial robots in 2021. This is due to the Asia-Pacific region's rising labor expenses, obliging enterprises to automate the manufacturing processes to keep their cost advantage. Countries like China are expected to recover from the industrial downturn by 2021, and countries like Taiwan and Thailand strive for even more automation. Automation in the Asia-Pacific region is anticipated to rise shortly due to low manufacturing costs, easy access to cheap labor, weak environmental and safety laws, and the government’s pushes for foreign direct investments (FDIs). As a result, the region will continue to hold a dominant market position in the traditional robots market.

What is the global demand for Industrial Robots in terms of revenue?