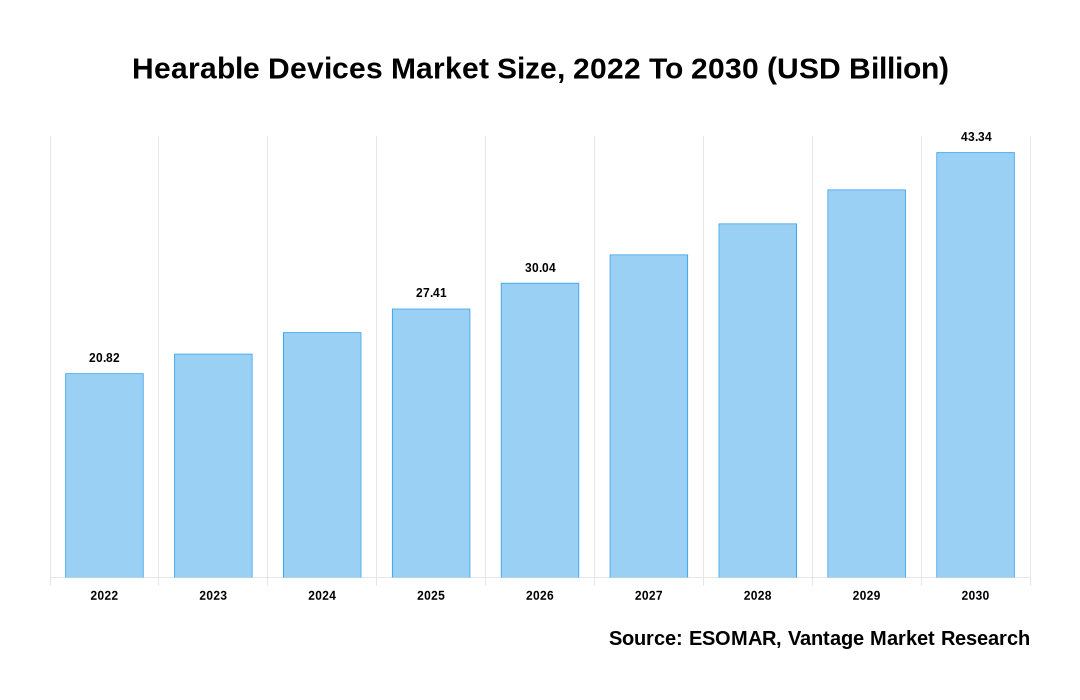 The global Hearable Devices market was valued at USD 19.21 Billion in 2021 and is projected to attain a value of USD 37.37 Billion by 2028 at a CAGR of around 9.9% over the forecast period, 2022–2028. Global demand for hearing aids has rapidly increased due to growing prevalence of sensory impairments and aging population. The global prevalence rate is expected to increase from 9% in 2010 to 16% by 2050. In addition, technological advancements have led to the development of more complex and user-friendly hearing aids that enhance the quality of life for those suffering from sensory impairments. This action has had a positive impact on not only the population suffering from hearing loss but also their family members.

The number of elderly people in western countries is rising rapidly. However, this does not only impact the aging society itself but also the capability of people to live independently and stay healthy. According to a survey conducted by World Health Organization (WHO), more than 1 in 5 people over 65 years old suffers from hearing loss. This number is expected to rise to more than 2 in 8 people by 2030. This will create a huge demand for hearing aids.

By Type, Hearing Aids are Holding the Major Share of the Hearable Devices Market

The most popular hearable device is the hearing aid. Hearing aids can help people with all different kinds of hearing problems, including hearing loss and some balance problems. Hearing aids are so popular because they work better than other devices that do similar things. They are much more affordable than they used to be too. There are so many options for people who wear hearing aids too. They can get them to go behind the ear, in the ear, or even completely in the canal. They have batteries that last longer and streamline profiles so they are more comfortable. As of 2021, more than 1048 million people are using hearing aids and the number is constantly increasing due to its increasing aging population and rising unhealthy hearing habits.

Wireless hearables as hearing aids, earphone, headphones, and wireless earbuds with smart abilities including communication, health monitoring, tracking through fitness apps etc. are currently gaining in popularity within the lifestyle technology market overall. In 2021, over 450 million wireless wearables were sold worldwide. This number will include a significant proportion of hearables. In the past year, there have been many new entrants into the hearable device market from established hardware and software manufacturers such as Apple, Samsung, Google, SENA etc., all vying to get a slice of this growing market.

With many of the major manufacturers coming from Asia, it was no surprise that Asia Pacific took the largest share in 2021. With over half of all Hearable Devices sold in APAC, typically more affordable prices for similar products are sold elsewhere along with mass market adoption of wireless technology. The region houses over 60% of the global population and it has highest number of aging and youth population who keep on purchasing hearing aids and headphones. In Asia Pacific, India and China are major contributor to the regional market, which is followed by Japan and Australia. China has the largest consumer base as well as it is the leading producer of Hearable Devices across the globe.

The Hearable Devices Market is Segmented as follows:

The Hearable Devices Market Scope can be Tabulated as below:

What is the global demand for Hearable Devices in terms of revenue?