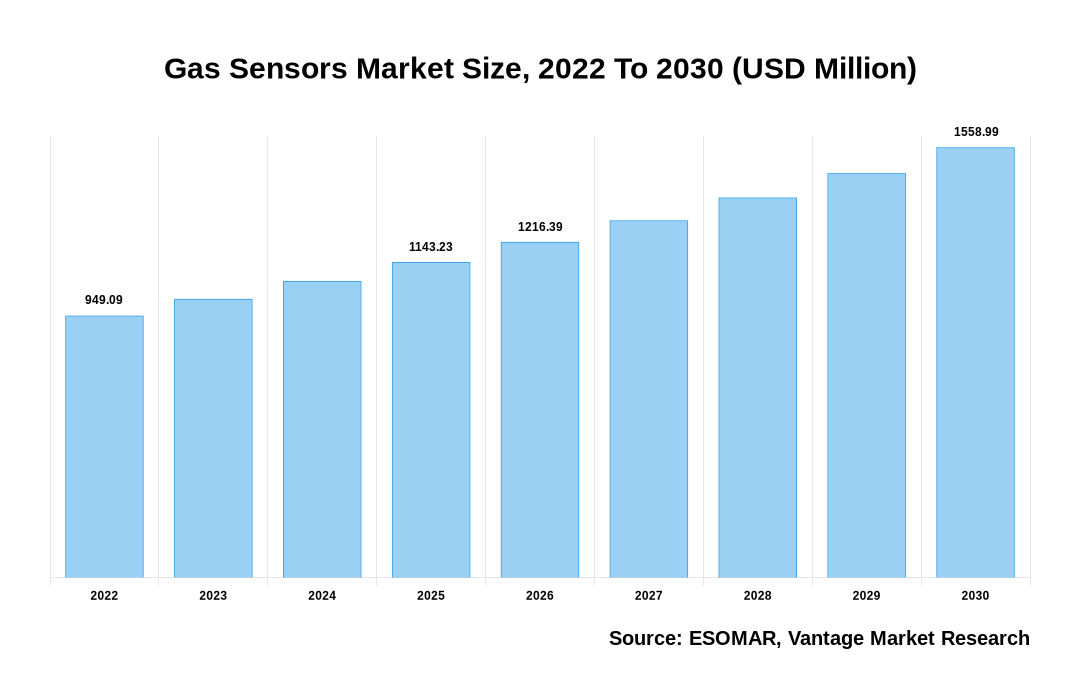 The Global Gas Sensors Market was valued at USD 892.3 Million in 2021 and is expected to reach a value of USD 1316.7 Million by 2028. In the projection timelines, the Global Market is anticipated to grow to exhibit a Compound Annual Growth Rate (CAGR) of 6.7%.

A Gas Sensor is a tool that determines the quantity or presence of gases in the surroundings or atmosphere. It further shows a change in resistance of the material used in the sensor based on the concentration of gases in the environment, which is then utilized to measure the output voltage. The type and concentration of gas are identified based on this variation in voltage value. Gas Sensors can identify volatile substances like gases and the state of the air. These sensors can convert the concentration of an analyte gas into an electronic or electrical signal by detecting and measuring the gas concentration. These sensors are employed in various sectors, including aerospace, energy, defense, and medicine.

On the other hand, the sensors' high initial cost is the main obstacle to their acceptance, which restrains the Gas Sensors Market's expansion.

Based on Gas Type:

The Gas Sensors Market was dominated by carbon dioxide (CO2) in 2021, and it is expected that this trait is continued in the forecast time. Carbon Dioxide (CO2) sensors are primarily used to monitor indoor air quality in homes, offices, cars, hospitals, and other settings. Therefore, many businesses are concentrating on creating Micro-Electromechanical Systems (MEMS) based Carbon Dioxide sensors for various applications. Likewise, during the forecast years, it is predicted that the Carbon Monoxide (CO) sensor segment will grow significantly. The need for Carbon Monoxide sensors is being driven by deaths caused by Carbon Monoxide poisoning. Furthermore, the market for Carbon Monoxide sensors is expanding due to government laws ensuring worker safety, further leading to market growth in the segment.

Wired dominated the market in 2021

The Wired segment dominated the Gas Sensors Market in 2021 and is projected to continue its dominance in the projection timelines. The benefits of Wired Gas Sensors are their higher accuracy, reduced cost, small size, and ease of maintenance. In addition, due to its direct connection to the unit receiving the input and suitability for usage in mines, oil rigs, and nuclear power plants, wired sensors are frequently among the most reliable systems. Furthermore, the growing use of Wired Gas Sensors in residential applications is another important driver of the market's expansion in the projected period.

Gas Sensors Market to Reach Valuation of USD 1316.7 Million By 2028 – Surge in Demand for Various Smart Sensing Technologies Drives the Market
In terms of revenue, the Global Gas Sensors Market is expected to reach USD 1316.7 Million by 2028, growing at a Compound Annual Growth Rate (CAGR) of 6.7% from 2022 to 2028. The growth of portability and wireless capabilities, along with advancements in communication technologies, are the main fac...
Read More

What is the global demand for Gas Sensors in terms of revenue?