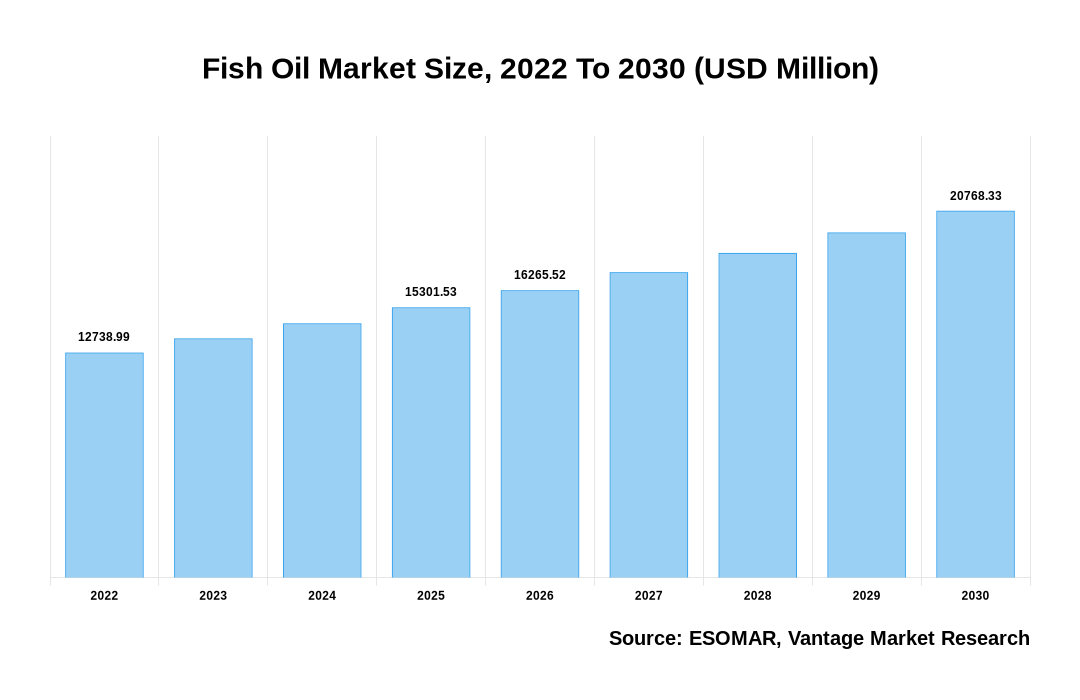 The Fish Oil market is expected to witness highest growth during the forecast period owing to the rising demand for Fish Oil by the older population with the considerable growth of the aquaculture industry. The rising awareness among the public and medical specialist about the importance of omega-3 fatty acids has substantial increase in the consumption of Fish Oil during the forecast period. Fish Oil offers multiple health benefits as it contains omega-3 fatty acids such as EPA (Eicosapentaenoic acid) which makes functioning of cardiovascular system better, and DHA (Docosahexaenoic acid) which plays an important role in effective functioning of the nervous system and this has effectively increased the demand for Fish Oil during the forecast period. Moreover, omega-3 fatty acids are actively used in the aquaculture segments like, animal nutrition and pet feed, pharmaceuticals, and supplements and functional foods which is expected to boost the demand of Fish Oil market during the forecast period. Now a days companies are enhancing their nutraceutical products along with concentrated EPA and DHA, and the rising demand of EPA and DHA in the human nutrition has made a positive impact on the Fish Oil market during the forecast period. With the increasing demand for Fish Oil and the developing aquaculture industry, the production of Fish Oil globally is very stagnant. Moreover, Fish Oil provides numerous health benefits such as it decreases the risk of deaths due to heart attack, lower triglycerides, dangerous abnormal heart rhythms and stroke which is expected to increase Fish Oil demand in the upcoming years.

The Anchovy Segment is Projected to Acquire the Largest Share in the Source Sector:

The Animal Nutrition Segment is Projected to Hold the Largest Share of During the Forecast Period:

Asia Pacific Region is Projected to Grow with the Fastest Rate During Forecast Period:

The immense growth in the region is attributed to increasing aging population united rising health concerns and awareness among the general public have increased the consumption of dietary supplements within the Asia Pacific region during the forecast period. Moreover, China is primarily focusing on the high-quality pharma grade Fish Oil in order to increase its demand for more applications in the pharmaceutical industry. Furthermore, according to the United Nations Statistical Office, Fish Oil export in Japan has significantly increased.

What is the global demand for Fish Oil in terms of revenue?