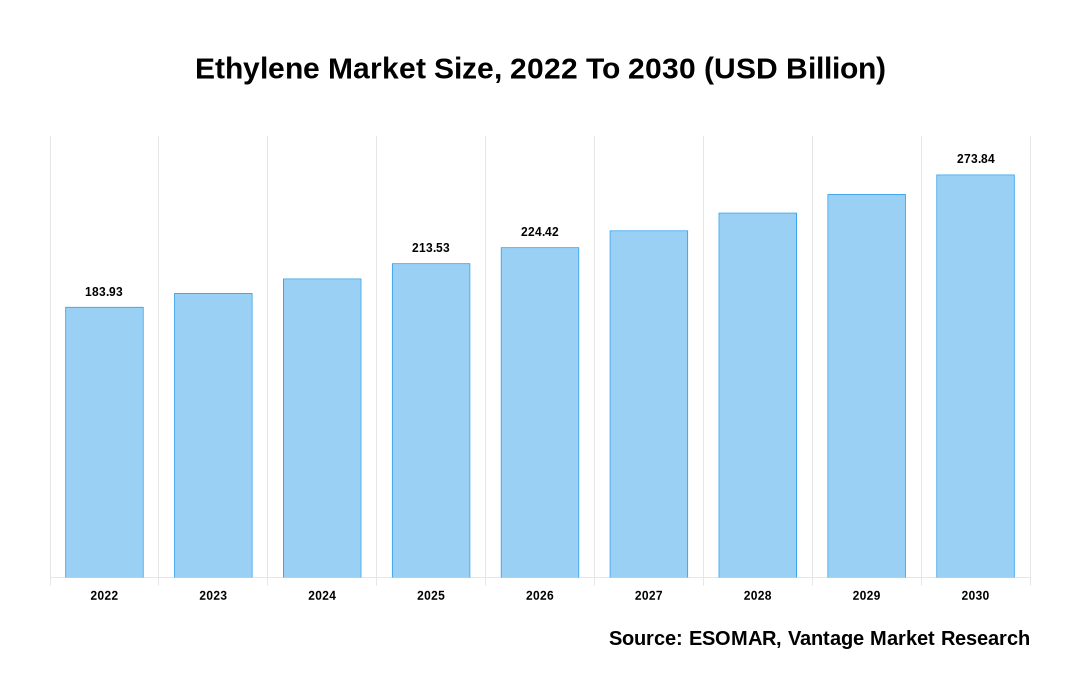 As the most widely used organic compound in the world, Ethylene is involved in the production of a vast array of products, including plastics, solvents, adhesives, and detergents. The Ethylene Market is expected to grow significantly in the coming years due to factors such as population growth, rising living standards, and increased demand from emerging economies. With a global population of over 7 billion people and projections for continued growth, there will be an increasing demand for consumer goods made with Ethylene-based materials. As incomes rise and living standards improve, people are increasingly buying products that require more packaging and use more synthetic materials. This trend is especially evident in developing countries where sales of packaged goods are growing rapidly. The Ethylene Market is also being driven by new applications for versatile compounds. For example, Ethylene oxide is used to make polyurethane foam, which is increasingly being used in the construction industry as insulation material. Ethylene dichloride is another important derivative of Ethylene that is used in the production of PVC (polyvinyl chloride), which has a wide range of applications in everything from pipes and cables to packaging film and credit cards. In short, the Ethylene Market is being driven by population growth, rising living standards, expanding applications, and growing demand from emerging economies. These trends are expected to continue in the coming years, making Ethylene an essential part of the global economy.

The automotive industry is a major consumer of Ethylene, accounting for around 28% of global demand in 2021. The trend is expected to continue, with the automotive industry forecast to consume around 30% of Ethylene by 2028. There are several reasons for the increased demand from the automotive industry. Firstly, the global automotive industry is growing. According to data from the International Organization of Motor Vehicle Manufacturers (OICA), global vehicle production reached 80 million units in 2021, up from around 78 million units in 2020. This growth is being driven by strong demand from China, which is now the world’s largest automotive market. Secondly, new technologies are increasing the use of Ethylene in vehicles. For example, Ethylene-based polymers are increasingly being used in cars to reduce weight and improve fuel efficiency. Ethylene is also used to produce light-emitting diodes (LEDs), which are becoming increasingly common in car headlights and taillights. Finally, government regulations are mandating the use of more fuel-efficient vehicles. In many countries, these regulations are increasing demand for smaller and lighter vehicles made with materials like Ethylene that help improve fuel efficiency. All these factors are leading to increased demand for Ethylene from the automotive industry, which is driving market growth.

The use of Ethylene in the production of plastics has been growing steadily in recent years, and this trend is expected to continue. The main drivers of this growth are the ever-increasing demand for plastics, as well as the continued development of new and more efficient ways to produce them. Ethylene is a key ingredient in the production of many different types of plastic, including polyEthylene (PE), polypropylene (PP), and high-density polyEthylene (HDPE). It is also used in the production of other synthetic materials such as vinyl chloride (VC) and acrylics. The vast majority of Ethylene produced globally is used in the manufacture of PE. In fact, around 80% of all Ethylene produced is used for this purpose. PE is the most common type of plastic used worldwide, and its usage continues to grow every year. This is largely due to its versatility; PE can be used for a wide range of applications, including packaging, construction, automotive components, and much more. PP is another popular plastic that uses Ethylene as a key raw material. Around 20% of all Ethylene produced is used in the production of PP. PP has many applications, including packaging, food containers, household goods, car parts, and more. HDPE is a third type of plastic that uses Ethylene as a primary raw material.

The need for Ethylene in the manufacture of various chemicals used in numerous industries is expected to drive the Ethylene Market during the forecast period. Ethylene is a versatile raw material and is utilized in the production of several chemicals, such as polyEthylene, vinyl chloride monomer, and Ethylene oxide. These chemicals find applications in varied industries, such as packaging, construction, automotive, and personal care. The growing demand for these industries is likely to propel the growth of the Ethylene Market during the forecast period.

The Ethylene Market is expected to be restrained by various factors such as feedstock availability and cost, high energy intensity, and strict environmental regulations.

● Another challenge facing the Ethylene Market is overcapacity. Despite a strong demand for Ethylene-based products, there is already too much capacity in the market, meaning that producers are struggling to make profits. This overcapacity is likely to continue in the short term as new capacity comes onstream from projects that were planned before the downturn in the oil price began a few years ago.

Given these challenges, it is clear that the Ethylene Market faces a number of headwinds in the coming years. However, with continued strong demand for its products globally, there are still opportunities for companies operating in this space to grow their businesses.

The Ethylene Market is constantly evolving in response to changing patterns in global demand. Here are some of the top trends that are shaping the market today:

1. Increasing demand from Asia: Asia is the largest consumer of Ethylene, accounting for over 50% of global demand. This trend is expected to continue as the region's economy continues to grow. The Asian market is expected to be the largest driver of growth in the Ethylene Market over the next few years. China is expected to be a particularly important market, as it looks to increase its production of chemicals and other downstream products.

2. Rising prices: Ethylene prices have been on the rise in recent years, due to increased demand and limited production capacity. These trends are expected to continue soon.

3. Capacity expansions: Several new Ethylene plants are currently under construction, which will help meet rising global demand. However, these projects can take several years to come online, so prices are likely to remain high in the meantime.

4. Changing product mix: The types of products made from Ethylene are constantly changing, as manufacturers strive to meet the needs of their customers. For example, newer applications for Ethylene include 3D printing and fuel cells. The Ethylene Market is also being impacted by changing feedstock mix. There is an increasing trend toward using lighter feedstocks such as natural gas liquids (NGLs). This is because NGLs offer several advantages over traditional feedstocks such as crude oil, including lower costs and a smaller environmental footprint.

5. Increased demand for lighter-weight and more fuel-efficient vehicles, which is driving up demand for Ethylene-based plastics.

6. The growing popularity of bioplastics, which are made from renewable resources and offer a more sustainable option than traditional plastics.

7. Fluctuating crude oil prices, can have a major impact on the cost of Ethylene production.

9. M&A activity. There has been a lot of mergers and acquisition activity in the Ethylene industry in recent years, with several major players looking to consolidate their position in the market. This consolidation is likely to continue in the coming years, as companies look to expand their operations and increase their share of the Global Ethylene Market.

The natural gas category is anticipated to have a considerably quicker revenue CAGR in the Ethylene Market based on source, during the forecast period. This is due to the rising exploration and production activities of shale gas, which is expected to fuel the growth of this category. The uses of natural gas as a feedstock for producing Ethylene have been constantly gaining traction over the past few years. This is attributable to the upgradation in technologies that have resulted in the cost-effective extraction of Ethylene from natural gas sources. Also, an increase in demand for energy-efficient and environment-friendly products has resulted in a surge in demand for Ethylene sourced from natural gas. Natural gas is cheaper and more readily available than crude oil, which makes it an attractive option for Ethylene producers. Additionally, natural gas produces fewer carbon emissions than other feedstocks, making it a more environmentally friendly choice. As environmental regulations become stricter around the world, this could give natural gas an even larger share of the Ethylene Market in the coming years.

Naphtha held the largest share in terms of revenue in 2021 and is anticipated to maintain its dominance throughout the forecast period. This can be attributed to several factors such as the low availability of substitute feedstock, the relatively lower production cost of Ethylene from naphtha as compared to other feedstocks, and the easy availability of naphtha in the market. The naphtha segment is anticipated to post a considerably quicker revenue CAGR than all other segments during the forecast period. Naphtha-based Ethylene plants have an advantage over their counterparts based on other feedstocks as they require relatively lower capital investment for setting up new units and also run at higher operating efficiencies. Additionally, most of the existing Ethylene plants around the world use naphtha as their primary feedstock, which gives them an added advantage in terms of economies of scale. These factors are expected to drive the demand for naphtha-based Ethylene over the forecast period. As naphtha is one of the lightest and most volatile components of crude oil, it is widely used as a feedstock for Ethylene production. Naphtha-based Ethylene plants have the advantage of being less capital-intensive than other types of plants. Furthermore, naphtha is easily transported and readily available worldwide.

Based on Sales Channel

The Asia-Pacific region is estimated to have the highest share of the Ethylene Market in 2021. This is attributed to the growing demand for chemicals and plastics from various industries in the region. Various countries in the Asia-Pacific region, such as China, India, Japan, South Korea, and Taiwan, are among the leading producers and consumers of Ethylene. In addition to being the largest producer of Ethylene, China is also the largest consumer of this chemical. The demand for Ethylene from various industries such as construction, automotive, packaging, and electrical & electronics is expected to drive the growth of the market in China. India is another major consumer of Ethylene in the region and is expected to grow at a considerable pace during the forecast period. The increasing demand for polyEthylene terephthalate (PET) from the packaging industry is expected to fuel the growth of the Ethylene Market in India.

Some of the key advancements in the market include:

● On November 8th, Exxon Mobil announced that it would be building a chemical manufacturing complex in Huizhou, Guangdong Province, China.

● On October 6th, Dow Chemical Company stated that it would build the first zero-emissions Ethylene and derivatives factory in the world.

● The Ethylene facility in Tianjin was the site of a joint venture between the Saudi Arabian company SABIC and the Chinese company Sinopec Sabic Tianjin Petrochemical Co. Ltd. By completing this work, annual output can be raised to 1.3 million tons.

Segmentation of the Global Ethylene Market

What is the global demand for Ethylene in terms of revenue?