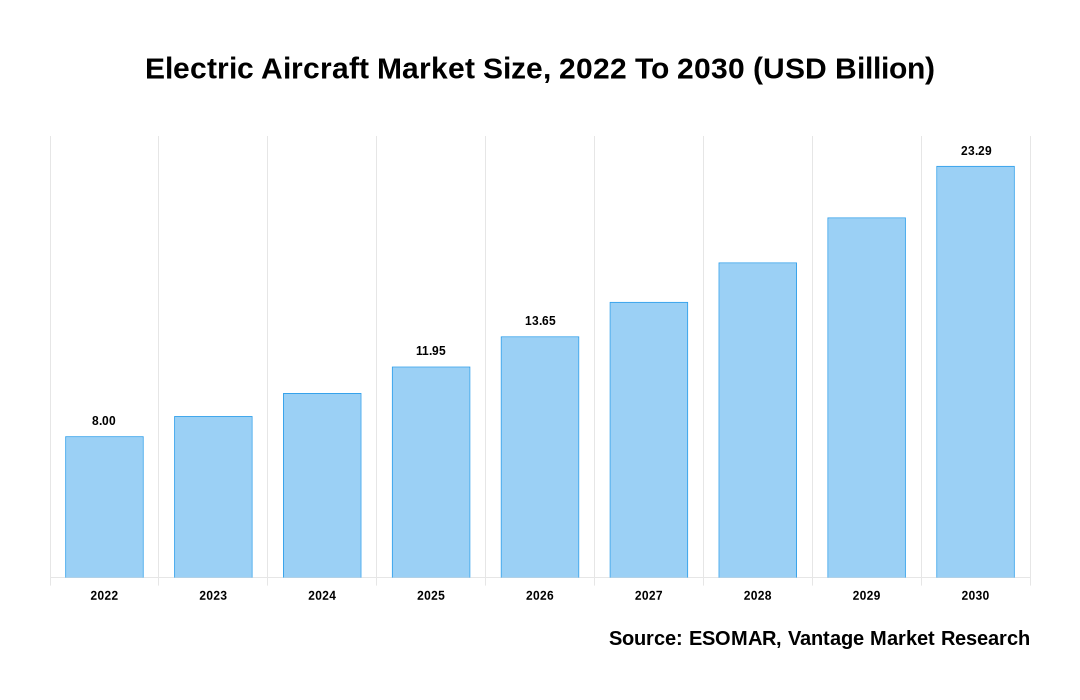 The Global Electric Aircraft Market is valued at USD 7.7 Billion in the year 2021 and is projected to reach a value of USD 17.3 Billion by the year 2028. The Global Market is forecasted to grow exhibiting a Compound Annual Growth Rate (CAGR) of 14.5% over the forecast period.

Electric Aircrafts are cutting-edge in terms of technology and operation. Helicopters, for example, can use electric backup to maintain safety control when landing despite any engineering problems. This is a significant driving force in the market. The use of Electric Aircraft opens up new opportunities for various new electrical components and systems, such as structural components, printed electronics, and smart skin, all of which are expected to increase market growth. The rising use of autonomous systems is propelling the worldwide Electric Aircraft industry forward. Other significant drivers driving market demand include the requirement for improved aircraft performance, lower gas emissions and airport noise, lower operational and maintenance costs, and a massive rise in aircraft deliveries. The growing demand for fuel-efficient and environmentally friendly aircraft is projected to be a major motivator for aircraft makers to pursue more fuel-efficient options.

The light and ultralight aircraft market is predicted to expand the most. Electric light jet aircraft provide quick transportation to a location and may land at any airport. Furthermore, these aircraft provide a high level of safety while still being cost-effective. Ultra-light Electric Aircraft are cost effective due to their simple design and simple production process. It also ensures the safety and easy availability of lightweight Electric Aircraft in commercial sectors, allowing the industry to increase in income. The market for Electric Aircraft is predicted to grow as a result of various technology breakthroughs and aircraft modernization plans. Electric UAVs with low noise levels are becoming more popular in civil and military applications. Electric Aircraft demand will be driven by an increase in business operations and the requirement for aircraft with low carbon footprints.

Based on System, Type:

Electric motors are becoming more popular due to their numerous advantages, including inexpensive maintenance and high-quality performance. Electric motors have few moving components and hence require little maintenance, making them extremely dependable. The design is straightforward, and little energy is wasted due to friction between moving parts. This function improves electric motor efficiency.

North America is projected to acquire the largest market share with a share of 34.70%. Due to the high number of deliveries of aircraft with more electric architecture to the United States, North America is a big market for more electric aircraft. The essential infrastructure, as well as a strong focus on research and development in the electrification of aircraft subsystems, are projected to help the North American area build more to Electric Aircraft Market. Lockheed Martin supplied 142 F-35 fighter jets to the US and its allies in 2021. The F-35's power-by-wire system is a significant step forward in Electric Aircraft technology. The principal flight surfaces are controlled by self-contained electro-hydrostatic actuators (EHAs).

The domination of the more Electric Aircraft Market in the region, on the other hand, is due to rising environmental concerns and more rigorous laws for aviation emissions. Despite the fact that deliveries of wide-body aircraft such as the Boeing 787 Dreamliner and the Airbus A350 XWB have slowed in the region, carriers still have a number of aircraft on order. Delta Air Lines, the first North American carrier to fly the A350 XWB, operated 17 Airbus A350-900s as of September 2021. Eight of the 25 A350-900s ordered have yet to arrive at the carrier. Thus, increasing the demand newer Electric Aircraft Market in this region.

What is the global demand for Electric Aircraft in terms of revenue?