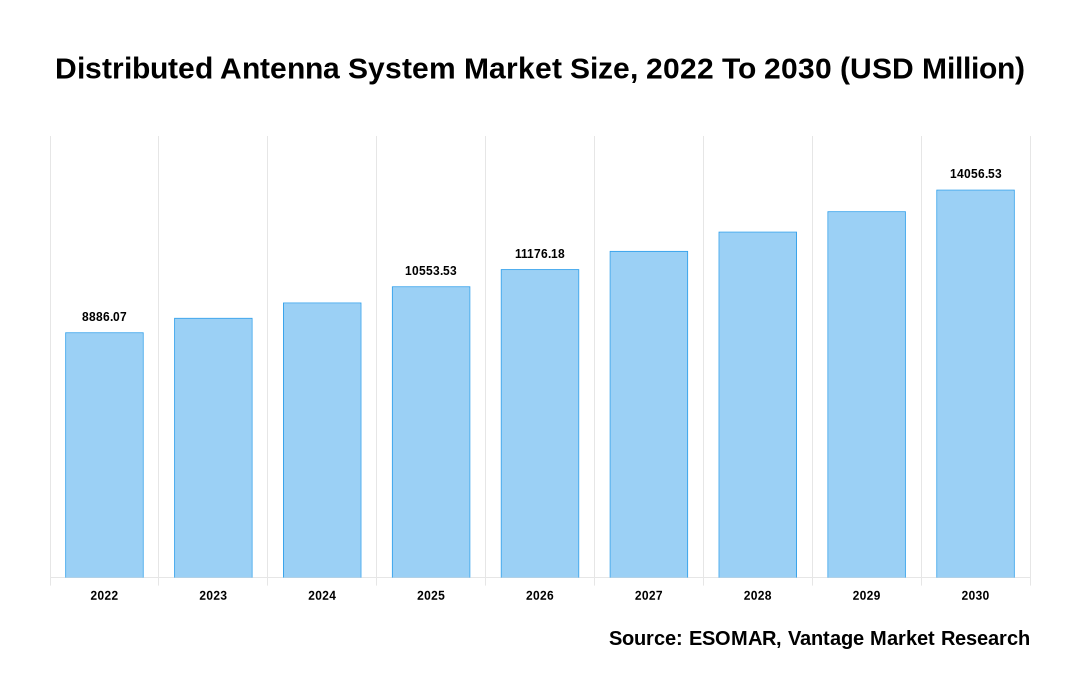 The Global Distributed Antenna System Market was valued at USD 8,391.5 Million in the year 2021 and is forecast to reach a value of USD 11,971.0 Million by the year 2028. The Global Market is anticipated to grow to exhibit a Compound Annual Growth Rate (CAGR) of 6.1% over the forecast period.

The market is expanding right now due to rising sales of smartphones, laptops, and tablets. Additionally, cellular service providers are concentrating on finding new ways to support more subscribers using data-intensive applications due to the proliferation of connected devices, in conjunction with the growing demand for extended network coverage and uninterruptible connectivity. As a result, they are spending money on Distributed Antenna System as part of their ambitions for an outside network.

Leading market participants are also devoting multi-operator and technological resources to support different mobile operator equipment components. They are also making hybrid active/passive Distributed Antenna System more widely available to increase their overall market share. Furthermore, the growth of smart cities, which rely on cellular operators and open-access Wi-Fi networks to provide services like the right to education, health - care, infrastructure management, safety and wellbeing, traffic management, and waste and water management, is expected to fuel the market in the years to come.

Based on the Ownership Model:

The Commercial segment accounts for a sizeable portion of revenue. One of the main factors propelling the market's expansion is the rising demand for a dependable network connection in healthcare institutions. Additionally, growing consumer knowledge of the advantages of Distributed Antenna System solutions is promoting market expansion. A Distributed Antenna System provides improved coverage and a larger bandwidth by dispersing and boosting radio frequency signals throughout the structures. It also ensures that mobile calls and communication systems are not dropped in hospitals and that emergency responders can communicate effectively. In addition, Distributed Antenna System hardware is waterproof and able to survive severe weather.

Asia Pacific is accounted to grow at the highest Compound Annual Growth Rate (CAGR) during the forecast period. Regional growth can be attributed to India and China's expanding infrastructure. The expansion is also aided by the expanding use of 4G/LTE connections and the significant presence of Distributed Antenna System providers. As a result, there are many prospects for deploying the Distributed Antenna System solution due to the adoption of 4G/LTE technologies and the expansion of infrastructure.

Distributed Antenna System Market to Reach Valuation of USD 11,971.0 Million by 2028 – Increasing Technological Advancement Drives the Market
In terms of revenue, the Global Distributed Antenna System Market is expected to reach USD 11,971.0 Million by 2028, growing at a Compound Annual Growth Rate (CAGR) of 6.1% from 2022 to 2028. The increasing demand for extended network coverage mounting& uninterrupted connectivity, the number of co...
Read More

What is the global demand for Distributed Antenna System in terms of revenue?