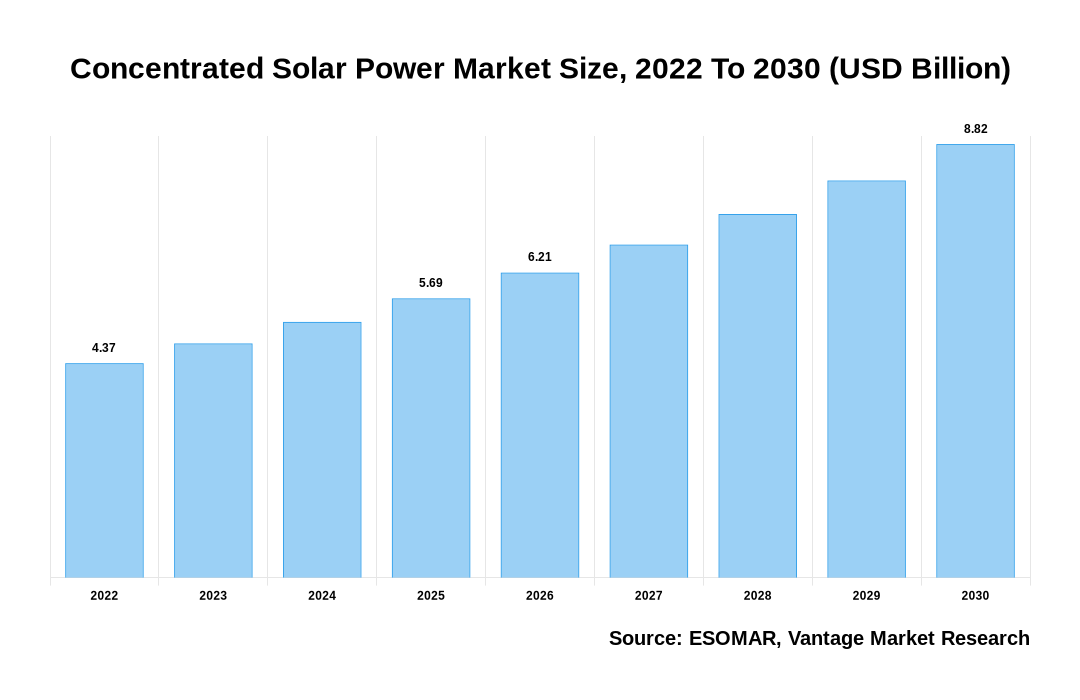 The Global Concentrated Solar Power Market is valued at USD 4.71 Billion in the year 2021 and is expected to reach a value of USD 8.04 Billion by the year 2028. The Global Market is anticipated to grow exhibiting a Compound Annual Growth Rate (CAGR) of 9.3% over the forecast period.

CSP stands for Concentrated Solar Power, which is a sustainable energy source that uses sunlight to generate electricity. It is also known as solar thermal power since it uses sunlight to generate steam and drive a turbine. Concentrated Solar Power systems have storage capacity, allowing them to generate power even on overcast days or when there is no sunshine. Due to the increased electrification plans in several nations throughout the world, sales of these systems are now increasing.

The industry is expanding owing to the growing popularity of solar energy and the rapid growth of manufacturers in the Concentrated Solar Power Market. The market is also being boosted by technological advancements in the production of solar energy from renewable sources. However, in some countries, the high cost of energy generation utilizing Concentrated Solar Power plants has hampered the market's expansion. Market stakeholders' collaborative efforts to minimize the capital and operational costs of Concentrated Solar Power systems are helping to drive market expansion. Furthermore, the increasing number of industrial and commercial power plants in many emerging countries is boosting market expansion by providing lucrative income potential for market participants.

Based on End User:

Utilities, EOR, and Others are the end users in the market. Key Concentrated Solar Power project developments in Asia Pacific and the Middle East and Africa regions, particularly in China, Saudi Arabia, the United Arab Emirates, and Morocco, are driving market growth in the utilities category. Furthermore, the utility industry's demand for concentrating solar power is driven by the necessity to generate renewable electricity with storage technology to meet the growing power demands of the residential sector. The industry is predicted to expand due to favorable government efforts and legislation promoting the use of renewable energy sources. Various financial and economic benefits offered by the government, such as Feed-in Tariffs (FiT) and tax credits, will boost segment growth till 2028.

Asia Pacific acquired the largest market share during the year 2021 with a share of 41.90%. This is due to the increasing number of Concentrated Solar Power facilities being built in nations like China. From 2021, China is expected to expand at the fastest rate. This is primarily owing to the country's rising investment in CSP for grid stabilization. Furthermore, the region emphasizes the necessity for sustained renewable electricity generation to support expanding economic activities. The Asia-Pacific region is seeing fast industrialization and urbanization, which is increasing the demand for reliable power. Furthermore, the region's rising air pollution levels are driving the government and private sector to use renewable energy sources. The expansion of the Asia Pacific Concentrated Solar Power Market is mostly due to the emergence of favorable government policies that encourage the adoption of renewable energy sources.

Concentrated Solar Power Market to Reach Valuation of USD 8.04 Billion by 2028 - Market is Being Driven by Environmental Concerns about Carbon Emissions and Initiatives to Minimize Air Pollution, Government Policy Support to Allow Uptake of Renewable Technologies, and the Integrality of CSP Systems with Thermal Storage Systems
From the period of 2022 to 2028, the Global Concentrated Solar Power Market is expected to reach USD 8.04 Billion in terms of revenue, growing at a Compound Annual Growth Rate (CAGR) of 9.3%. One of the primary aspects driving the market's positive outlook is a large increase in demand for renewabl...
Read More

What is the global demand for Concentrated Solar Power in terms of revenue?