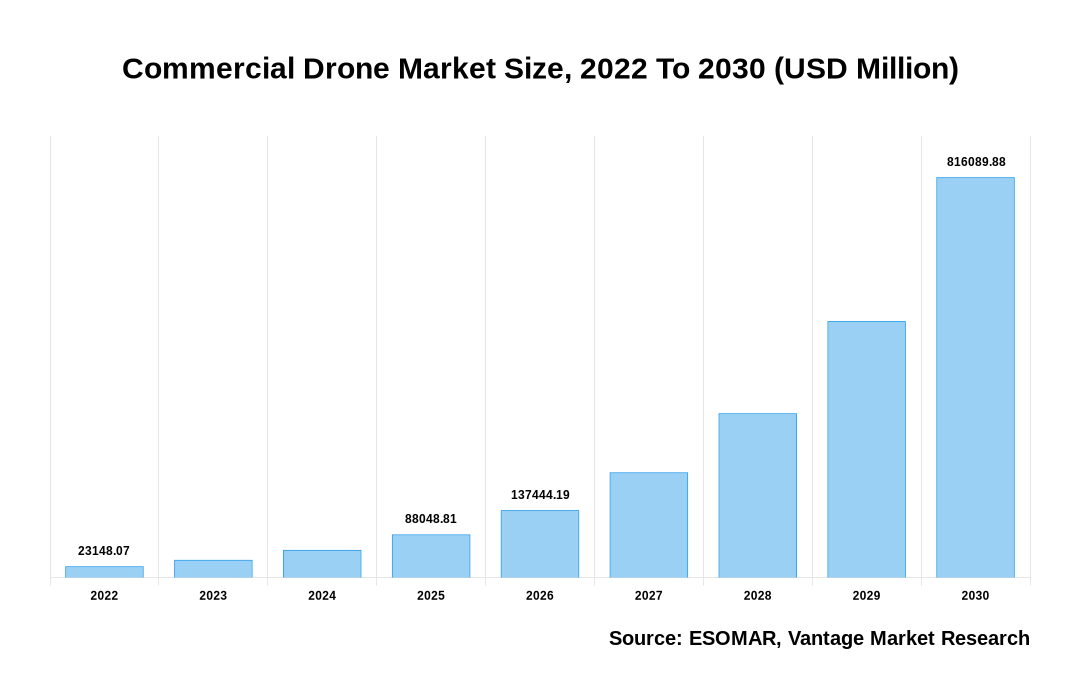 The Global Commercial Drone Market was valued USD 14,829.5 Million in 2021 and is anticipated to reach a value of USD 21,7043.6 Million by 2028. The Global Market is forecasted to grow to exhibit a Compound Annual Growth Rate (CAGR) of 56.4% over the forecast period.

A Commercial Drone is generally defined as a quadcopter, octocopter, hexacopter, or multi-rotor vehicle utilized strictly for commercial purposes. These machines usually are not used for recreational or personal purposes, but strictly for professional perusal. High-definition thermal cameras on these drones allow users to view what the drone sees in real-time. Small businesses that lack the funding to engage a professional aerial photographer or videographer have a great alternative to Commercial Drones. Companies may use these drones to capture high-quality aerial videos and photos for less money than paying specialists. Increasing technical breakthroughs in Commercial Drones and rising demand for Commercial Drones in the agriculture, construction, and logistics industries are the main factors propelling market revenue growth over the forecast period.

Modern innovations like Machine Learning (MI) and Artificial Intelligence (AI) are being integrated to expand the Commercial Drone sector significantly. Furthermore, the market is anticipated to grow as a result of the growing use of small uncrewed aerial vehicles for a variety of commercial purposes, precision agriculture, law & order, wildlife monitoring, including aerial photography, filmmaking, entertainment, disaster management, research & development, logistics & transportation, relief & rescue operations, and construction. In addition, demand for autonomous systems in the energy, oil & gas, and power production sectors is projected to drive market expansion.

On the contrary, in recent years, Commercial Drone technology has offered a substantial risk to the general public and government organizations. Hence, the growing trend of employing drones for armed attacks, surveillance, and espionage is cause for considerable concern. Furthermore, governments from several nations have put strict guidelines and standards in place for using Commercial Drones in their countries. Therefore, concerns about the safety and security of drones are a factor that will limit market revenue growth over the forecast period.

The Rotary Blade category dominated the market in 2021. During the forecast period too, the Rotary Blade segment is anticipated to account for a more significant revenue share in the global market. This share is because this sector is used more frequently for commercial purposes like monitoring, surveillance, and photography. Drones with Rotary Blades are capable of quick movements and long-term fixation on a single target. Due to the growing use of these Hybrid Drones in Military & Defense applications, the Hybrid Commercial Drone sector is anticipated to proliferate in the worldwide market over the forecast period.

The Filming & Photography category dominated the market in 2021 and is expected to continue its dominance in the projected period. Due to professional photographers' growing usage of drone cameras, the Filming & Photography category accounted for the most significant revenue share. In recent days, Commercial Drone are found to be a crucial component of the photographic industry. Furthermore, for motion pictures, sweeping shots, behind-the-scenes footage, high-and-wide shots, and live streaming, Commercial Drone are turning out to be quite helpful. In addition, during the projected period, the global market for the Precision Agriculture segment is anticipated to grow at a very rapid rate. As a result, Commercial Drone are used more frequently in this industry to collect business data, monitor and analyze fields, plan crop plantations, and do other things.

The Asia Pacific is anticipated to expand at a considerably high Compound Annual Growth Rate (CAGR) during the forecast period. This expansion results from growing drone technology adoption and investment among significant companies worldwide, particularly in China, Japan, and India. The second-largest drone market in the world is China. Governments are also attempting to create favorable drone rules, which are anticipated to promote market revenue growth in this area. In addition, numerous start-up businesses are experimenting with new Commercial Drone uses and trying to make the devices safer.

What is the global demand for Commercial Drone in terms of revenue?