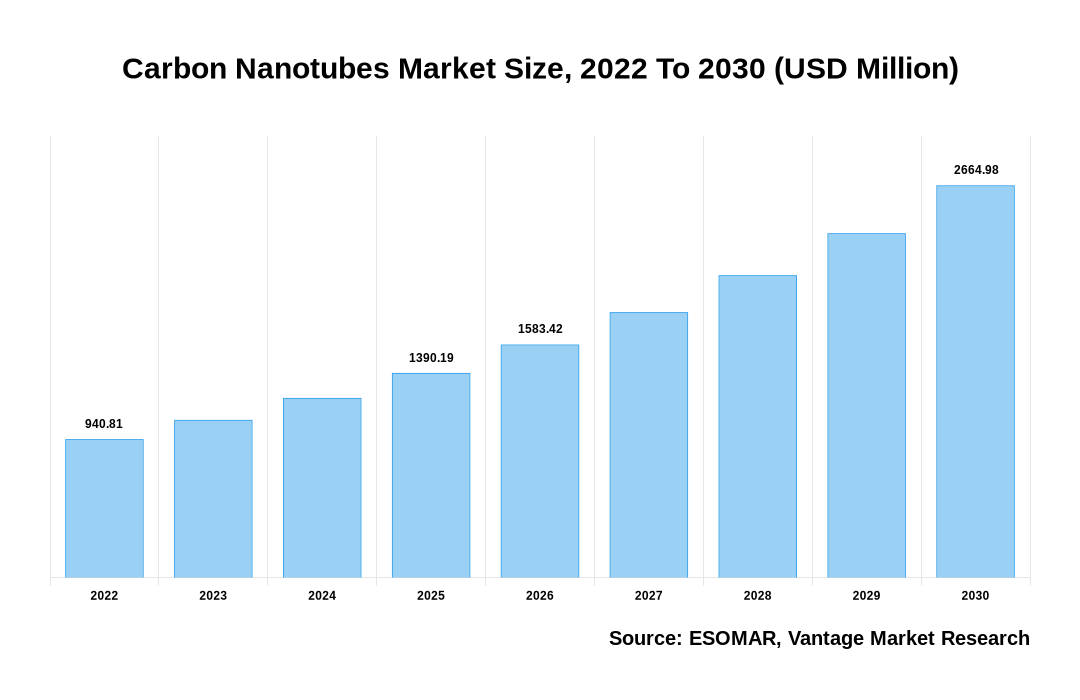 The major driver for this market is the increasing awareness about the potential applications of Carbon Nanotubes and their innovative properties. Carbon Nanotubes are excellent candidates for various electronic and optoelectronic devices owing to their high thermal conductivity, electrical and chemical stability, low resistance, lightweight and small size. These attributes have propelled Carbon Nanotubes into numerous industrial applications such as solar cells, infrared detectors, and transistors. Some other key contributors to the growth of this market include the development of novel production methods for aiding scalability, regulatory approvals for wider deployments, and increasing demand from the healthcare sector. The market for Carbon Nanotubes has been growing rapidly in recent years as scientists continue exploring these innovative materials' potential applications. Some of the most promising applications involve nanotube-based drug delivery systems and high-efficiency fuel cells. Nanotubes have many unique properties that make them attractive for use in various applications, such as their ability to conduct heat and electrical current well. They are also strong and lightweight, making them possible candidates for use in various consumer products. One of the most promising applications of Carbon Nanotubes is in the field of energy storage. They can hold a great deal of energy, making them ideal candidates for powering large electronic devices and vehicles. They are also being explored as potential solutions for environmental issues such as climate change and pollution. Several companies are already working on developing Carbon Nanotube based products.

The sector’s growth is also due to the increasing development of electronic and photonic products requiring high-quality Carbon Nanotubes. In addition, several large-scale industrial applications are currently being developed that will also require substantial quantities of Carbon Nanotubes. These include quantum computing, drug delivery, and advanced materials research. Various companies are focusing on developing new production processes to accommodate the growing demand for scalable carbon nanotube production methods. Several of these processes involve chemical vapor deposition (CVD) to produce thin sheets of Carbon Nanotubes from a precursor material. Alternatively, other production methods include using an arc discharge process or a plasma-enhanced CVD process. In each case, the aim is to achieve high yields and low processing costs. The development of scalable carbon nanotube production methods is expected to lead to increased volumes and improved material quality. This will help meet the growing needs of some important industrial applications. One of the key restraints on the growth of the Carbon Nanotubes Market is their high cost. This is partly due to their unique properties, which make them particularly suited for applications where size and/or weight are critical factors, such as electronic devices and bio-systems.

Additionally, since Carbon Nanotubes require a more sophisticated manufacturing process than traditional materials, their costs have tended to remain high. However, recent advances in production techniques are expected to drive down the cost of Carbon Nanotubes over time, opening up new applications and market growth opportunities. Another key restraint on the growth of the Carbon Nanotubes Market is their limited availability. Due to their small size and high density, these tubes are difficult to produce in large quantities. They are also susceptible to damage during production, which makes them ineligible for some applications. As a result, there is still much room for innovation and expansion in this market as manufacturers strive to find ways to produce more Carbon Nanotubes at lower costs while maintaining quality control standards. Despite these key restraints, there is significant potential for growth in the carbon nanotube market over the next few years. Increased demand from emerging markets such as healthcare and electronics will help drive prices down while boosting adoption rates among key businesses and consumers.

● In automobiles, using Carbon Nanotubes can result in fuel efficiency improvements and weight reduction. The material has also been integrated into electronic components such as smartphone sensors and display screens.

● Electronic manufacturers such as Samsung are investing in research and development of new devices using Carbon Nanotubes due to their potential for reducing manufacturing costs and improving product performance.

● In recent years, there has been a growing trend toward using functional materials in electronics and other devices. These materials can be customized to meet specific needs without compromising performance or reliability. As a result, the market for Carbon Nanotubes is forecast to grow at a CAGR of over 20% during the next decade.

● Another key driver of the Carbon Nanotubes Market is their potential use in aerospace and defense applications. These applications include carbon-based electronic YORK material composites and high-performance materials. In 2021, revenues from aerospace and defense were estimated to be worth $24 billion globally. This growth is expected to continue as companies strive to improve aircraft capabilities, build stronger armor systems, and develop new sensors for military applications.

● The pharmaceutical industry is also expected to Witness Higher Growth in demand for Carbon Nanotubes in coming years owing to their pharmacological properties, such as strong interactions with enzymes and membranes, which make them ideal candidates for drug delivery systems.

Chemical vapor deposition (CVD) has emerged as the dominant technology for fabricating Carbon Nanotubes (CNTs) due to its ability to produce atomic-scale thicknesses while maintaining high throughput and low processing costs. CVD has a major market share in the chemical vapor deposition segment, followed by catalytic chemical vapor deposition (CCVD) and high-pressure carbon monoxide reaction (HPCMR). The availability of several versatile substrates such as gases, liquids, and powders for CVD has helped it dominate the market. However, limitations related to the production of defect-rich products and difficulties in manipulating graphene layers are currently restraining its growth. On the other hand, CCVD offers higher yields of well-controlled products with few defects but suffers from slow deposition rates. HPCMR is relatively new but is expected to grow rapidly due to its ability to produce large quantities of Carbon Nanotubes at low costs. CVD is a process where high-temperature, high-pressure gas mixtures deposit materials. The key benefits of CVD are low manufacturing costs and fast turnaround times. CCV is a similar technique that uses hot plasma instead of high-pressure gases to create layers of material on a substrate. HPCMR is an emerging technique that uses high pressure and temperature to break down carbon dioxide into carbon monoxide and water vapor. The growing demand for semiconductor materials, display devices, and bioplastics is likely to drive the growth of CVD in the next few years. In addition, increasing awareness about environmental-friendly practices is expected to stimulate the adoption of HPCMR shortly.

Based on End-Use Industries

The electronics and semiconductors segment held the largest market share in the Carbon Nanotubes Market in 2021. This is due to their widespread use in various end-use industries such as energy, telecommunications, aerospace, and automotive. The growth of the Carbon Nanotubes Market is largely attributed to the increasing demand for innovative materials that can improve the performance of electronic devices. The applications for Carbon Nanotubes in electronics are widespread and increasing rapidly due to their unique properties such as super strength and ability to conduct electricity and heat. These properties have made Carbon Nanotubes ideal candidates for integrating semiconductor devices, PCBs, and other electronic components. In 2021, transistors were the leading end-use industry for Carbon Nanotubes. This preference was due to their high performance as switches and signal amplifiers, which enabled them to be incorporated into high-end electronic products such as mobile phones, laptops, gaming consoles, automobiles, etc. Other popular end-use industries include television panels, sensors, Nanoelectronics research facilities, etc.

North America accounts for the highest market share in the forecast period. This region attained considerable growth due to increasing R&D investments, the adoption of advanced technologies, the presence of major players, and growing demand from various sectors such as automotive, aerospace, and other industrial applications. The automotive sector is estimated to be the largest end-user segment in North America, with consistent growth over the forecast period. Developing advanced carbon fiber products, including performance cars and commercial vehicles, has helped this sector grow significantly. The increase in demand for high-end vehicles might restrain the market growth rates in other segments over the next few years. However, technological developments such as new manufacturing processes that produce lightweight carbon fiber components will provide opportunities for growth in future years. Aerospace & Defense is another key end-user segment that contributes most of its revenue from Carbon Nanotubes across all regions (North America, Europe, and Asia Pacific). Major defense companies are investing extensively in R&D activities related to Carbon Nanotubes owing to their military applications, such as enhanced heat resistance and acoustic dampening properties. Other leading industrial application markets for Carbon Nanotubes include electronic sensors, energy storage systems, etc.

● In March of 2021, Cabot Corporation released its next batch of Carbon Nanotubes, ENERMAX 6. As the most conductive multi-walled CNT product in Cabot's lineup, this product is a high-performance CNTs thanks to its high aspect ratio.

● South Korean electronics company LG Chem has opened a factory to produce Carbon Nanotubes. Starting in April 2021, the company plans to go after the expanding market for CNTs used as a material for cathodes in electric car batteries.

● Sustainable technology firm Johnson Matthey, the independent technology innovation center CPI and the independent chemical producers at Thomas Swan in the United Kingdom will research how to improve battery performance in June 2021. With help from Innovate UK and the Faraday Battery Challenge, the ICE-Batt project has been able to secure funding. The performance of batteries could be greatly enhanced by studying how novel CNTs and graphene nanoplatelets (GNPs) can do so. The UK's innovation agency is likely to make this possible. Segmentation of the Global Carbon Nanotubes Market

Carbon Nanotubes Market to Reach Valuation of USD 1823.7 Million by 2028 – Increasing Demand in the End-use Industries Drives the Market
In terms of revenue, the Global Carbon Nanotubes Market is expected to reach USD 1823.7 Million by 2028, growing at a CAGR (Compound Annual Growth Rate) of 14.1% from 2022 to 2028. The increased need for lightweight structural polymer composites, conductive fillers for EMI shielding materials, and...
Read More

What is the global demand for Carbon Nanotubes in terms of revenue?