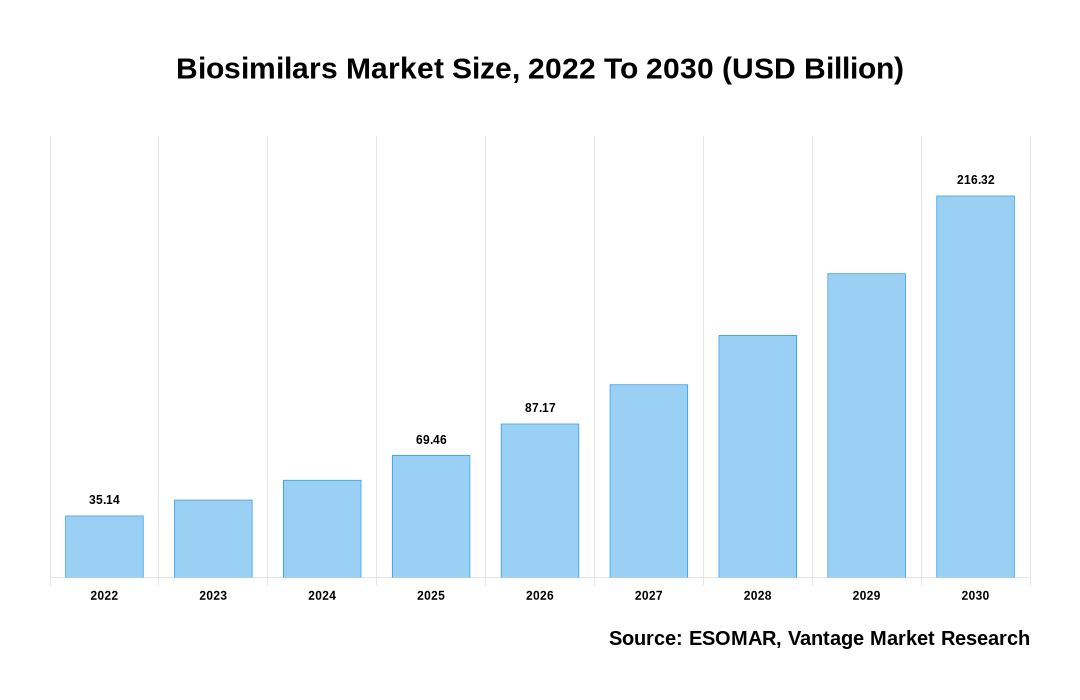 Global Biosimilars market is valued at USD 28.46 Billion in 2021 and is projected to attain a value of USD 103.94 Billion by 2028 at a CAGR of 25.6% during the forecast period, 2022–2028. COVID-19 may have a big impact on the Biosimilars market, and it has provided a considerable barrier to pharmaceutical companies working on Biosimilars development. During the current pandemic, the FDA's approval of non-COVID treatments has been reduced, which is predicted to slow the process of product approval and marketing, stifling market growth. Furthermore, because most clinical studies have been postponed in order to address the COVID-19 crisis and reduce the risk of infection among participants, most pipeline goods are moving at a snail's pace in terms of research and development. There is also a supply chain and raw material shortage as a result of the global lockdown and travel restrictions, which will have an influence on Biosimilars production. COVID-19 has so emerged as a result of the aforementioned circumstances.

The rising frequency of chronic diseases, as well as increased demand for Biosimilars due to their cost-effectiveness, are driving market expansion. Regulatory approvals and other rules in various countries that encourage the use of Biosimilars are also a major driving force in the Biosimilars industry. However, during the forecast period, the complexities of Biosimilars development and manufacturing, as well as resistance from reference biologic manufacturers, are expected to limit the market's growth.

Increasing Demand for Biosimilar Drugs due to their Cost-Effectiveness

Biosimilars are typically 20–30% less expensive than their branded counterparts. Patients benefit from both cost savings and access to highly effective treatments as a result of this. When compared to originator biologics, biosimilars have cheaper R&D expenses. Biosimilars are less expensive since R&D expenses are reduced. Biosimilars with lower prices have a tendency to drive down the prices of reference biologics due to price rivalry among manufacturers. Biosimilars medications' considerable cost-to-benefit ratio is predicted to increase their demand in the coming years.

Biosimilars development is a time-consuming and expensive procedure that necessitates major financial inputs, technical capabilities, clinical trial knowledge, scientific standards, and quality control systems. Biosimilars producers, unlike generic drug developers, are obligated to invest in clinical trials and post-approval safety monitoring procedures that are comparable to those of the original innovator businesses. Another significant problem in the production of Biosimilars is the capacity to regulate variability during the manufacturing process, resulting in end products that are identical to their Biosimilars counterparts. In terms of safety and efficacy, Biosimilars should meet established quality requirements.

The Global Biosimilars Market can be segmented by Product Class into Monoclonal Antibodies, Recombinant Hormones, Immunomodulators, Anti-Inflammatory Agents, and Other Product Classes. By Application into Blood Disorders, Growth Hormonal Deficiency, Chronic and Autoimmune Disorders, Oncology, and Other Applications. Based on Region, the Biosimilars Market is segmented into North America, Europe, Asia Pacific, Latin America and Middle East & Africa.

Europe held the greatest proportion of the biosimilars market in 2020, followed by Asia Pacific and North America. The looming patent expiry of biologic drugs and the launch of new biosimilars, the increased frequency of chronic illnesses, the rise of new companies, and early entry into the market are all driving growth in these markets.

The Biosimilars market is segmented as follows:

The Biosimilars market scope can be tabulated as below:

What is the global demand for Biosimilars in terms of revenue?