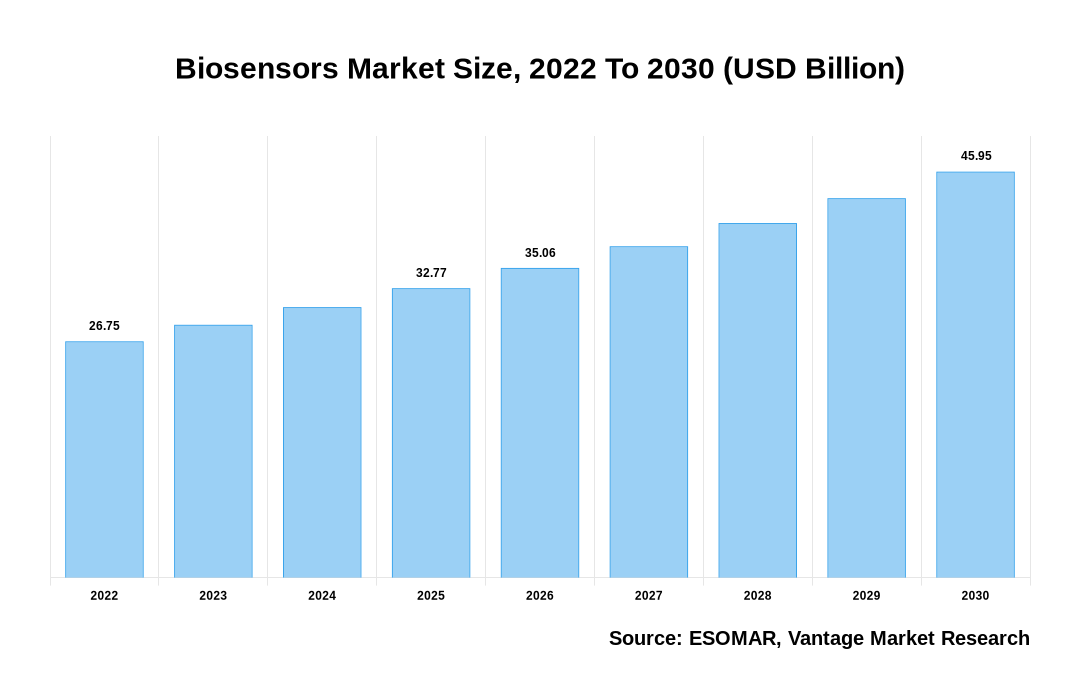 Global Biosensors Market is valued at USD 25.1 Billion in the year 2021 and is anticipated to reach a value of USD 38 Billion by the year 2028. The Global Market is forecasted to grow exhibiting a Compound Annual Growth Rate (CAGR) of 7.2% over the forecast period.

The appearance of nanotechnology-based Biosensors, rising utilization of Biosensorss to monitor glucose levels in the individuals with diabetes, substantial technological advancements, rising government initiatives towards diagnostics, and the upsurging demand for home-based points of care devices owing to the coronavirus pandemic are the factors driving the growth of the Biosensors Market.

Moreover, the increasing demand for point-of-care testing procedures is fueling the demand for effective Biosensors during the forecast period and will continue to grow in the upcoming years. Furthermore, the consumers are being advised to make use of Biosensors for regular detection of pathogenic activities in the body owing to the occurrence of chronic ailments which is expected to drive the Biosensors to demand in the coming years.

On the basis of type, the market is segmented as Sensor Patch and Embedded Device. The embedded devices are projected to acquire the largest share of the Biosensors Market during the forecast period. The embedded devices are widely used in various applications like home diagnostics, point of care, environmental monitoring, and food and beverages which is driving the embedded devices segment during the forecast period. Many healthcare facilities have started adopting embedded solutions for the medical devices permitted with IoT in order to address the lack of availability of doctors in remote areas.

North America is Projected to Acquire the Largest Share

Segmentation of the Global Biosensors Market:

Biosensors Market to Reach Valuation of USD 38 Billion by 2028 - The Appearance of Nanotechnology-Based Biosensors, Rising Utilization of Bio-Sensors to Monitor Glucose Levels in the Individuals with Diabetes are Driving the Market Growth
In terms of revenue, the Global Biosensors Market is probable to reach USD 38 Billion by 2028, growing at a Compound Annual Growth Rate (CAGR) of 7.2% from 2022 to 2028. The substantial technological advancements, rising government initiatives towards diagnostics, and the upsurging demand for home-...
Read More

What is the global demand for Biosensors in terms of revenue?