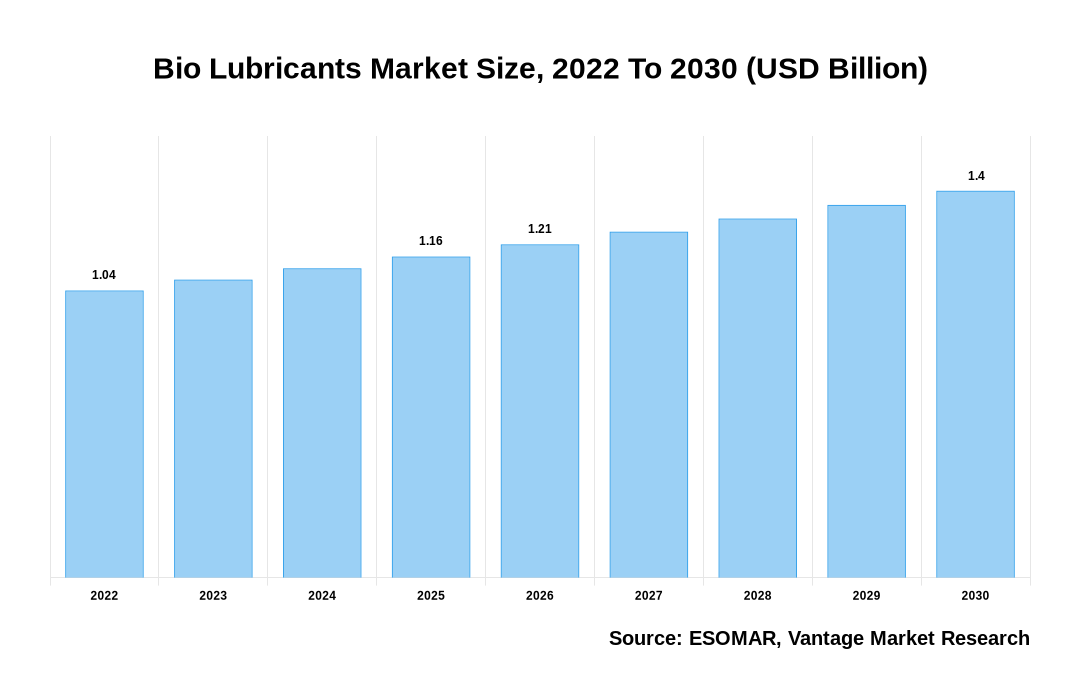 The Global Bio Lubricants Market was valued at USD 1.9 Billion in the year 2021 and is expected to reach a value of USD 2.3 Billion by the year 2028. The Global Market is anticipated to grow to exhibit a Compound Annual Growth Rate (CAGR) of 3.9% over the forecast period.

Bio Lubricants are primarily produced by performing chemical modifications to plant-based oils. Several mutations, including epoxidation, transesterification, and esterification processes, are used to create bio-lubricants. These lubricants are frequently employed to lessen friction on various surfaces. Heavy machinery like railroad flanges, chainsaw bars, and two-stroke engines use bio-lubricants because they are eco-friendly, biodegradable, non-toxic, and renewable. Additionally, they have several benefits over synthetic and mineral oil-based lubricants and need less application effort. Alternatives to traditional lubricating oils that harm the environment by releasing toxic vapors include bio-based lubricant alternatives. The industry rapidly expands among environmental activists due to its unique "environmental benignity."

The market is being restricted by the high cost of Bio Lubricants s and their lack of lubricating characteristics, which is the biggest issue facing makers of Bio Lubricants s. The cost of these lubricants is a substantial obstacle for the market to get beyond. A Bio Lubricants is more expensive than a standard lubricant. Most bio-based goods are priced similarly to mid to high-performance mineral oil goods. Over the coming ten years or so, it is anticipated that these factors will have a specific impact on market growth.

Based on Base Oil:

Vegetable Oil was the market segment with the most significant market share, and this trend is anticipated to continue over the projection period. Due to its many uses, oxidative stability, and outstanding performance, Vegetable Oil holds a sizable market share. In addition, the abundance of Vegetable Oil seeds, which are used as raw materials, might also be acclaimed for the rise. The development of Vegetable Oil over the animal fat segment is also likely to be aided by growing conservation concerns for wildlife.

Based on End-Use Industry Type:

The Industrial sector has the most significant market share and is anticipated to hold its position throughout the projection period. Agriculture and the building industries are among the various industries included in the Industrial sector. These two are considered the biggest markets for bio-lubricants. Environmental laws regarding the disposal of lubricants, ecolabels, and tax incentives for using bio-lubricants are to blame for the industrial segment's domination. The use of bio-lubricants or ecologically acceptable lubricants (EAL) in maritime boats is now required by several regulations, including the vessel general permit (VGP) in the U.S. and EcoLabel in Europe, which is fueling the market.

The largest market for bio-lubricants has proved to be in Europe. For developing nations, manufacturing lubricants such as chainsaw oils, mold release agents, and two-stroke oils in the environment has become a serious concern. Therefore, the developed countries in Europe boast of ecolabels that encourage the use of bio-lubricants rather than conventional ones. Furthermore, the region is seeing a rapid increase in bio-based chemicals such as biofuels and the bio-lubricants. This is seen in the purview of strict laws and the ongoing transition towards the bio economy in nations like Germany, Italy, the Nordic countries, Benelux, and France. Therefore, the European market is expected to benefit significantly in the years to come.

Over the years, the North American market has expanded quickly, in large part due to rising passenger automobile sales. In the upcoming years, the regulatory environment will support the demand for and production of bio-lubricants. For example, the U.S. EPA has developed laws and regulations that mandate marine boats operating in U.S. waters to get the obligatory Vessel General Permit (VGP) and use environmentally friendly lubricants at oil-to-sea interfaces.

What is the global demand for Bio Lubricants in terms of revenue?