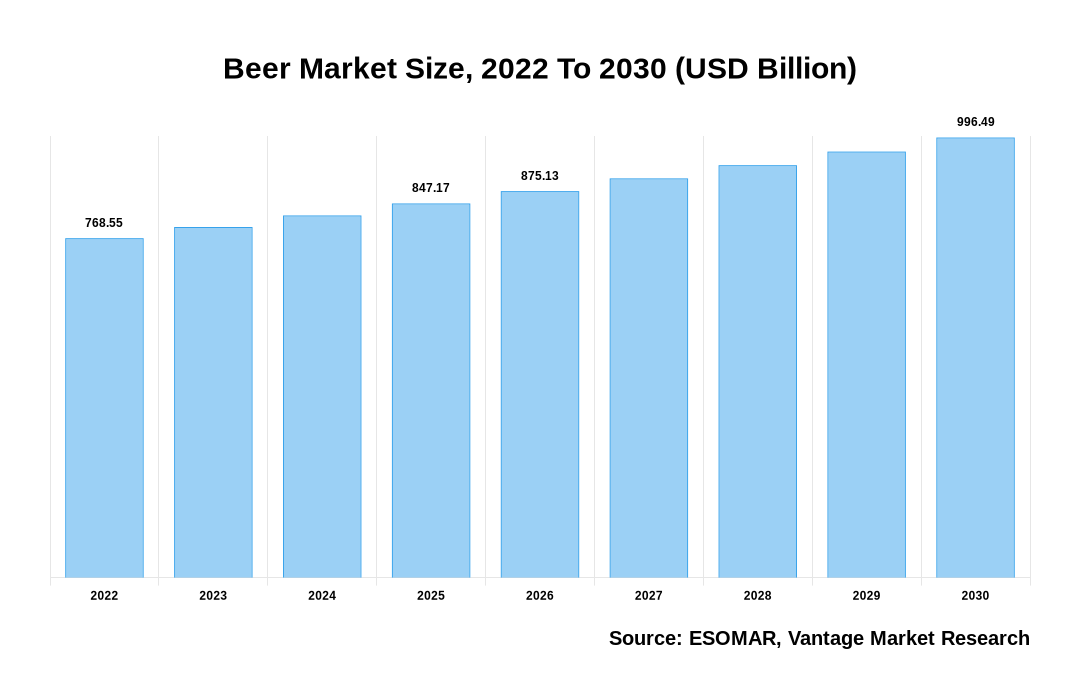 Global Beer Market is valued at USD 744.7 Billion in the year 2021 and is forecast to reach a value of USD 915.4 Billion by the year 2028. The Global Market is projected to grow exhibiting a Compound Annual Growth Rate (CAGR) of 3.5% over the forecast period.

The Beer Market is witnessing growth and will continue to grow in the coming years owing to the rise in disposable income, increasing number of craft breweries, changing consumer preferences, and the emergence of strong and flavorful beers. The increasing number of social drinkers is expected to increase the demand for Beer during the forecast period.

Additionally, the low alcohol Beer and alcohol-free Beer have gained popularity among youngsters trying to make the choice of a positive lifestyle and manage their intake of alcohol which are fueling the Beer Market growth during the forecast period. Furthermore, the Beer manufacturing companies are launching several new brands and products in order to expand their consumer base during the forecast period. In addition, the increasing influence of social media, growth of the e-commerce sector, and rising internet penetration has authorized manufacturers of Beer to prepare advanced retail channels which are expected to boost the growth of the Beer Market in the coming future. Moreover, consumers are always looking for new flavors in Beer in order to explore their taste for Beer which is increasing the demand for Beer in coming years.

Furthermore, the trend of consuming local Beer is responsible for the increase in the number of breweries and this is projected to boost the growth of the Beer Market during the forecast period. Besides, Beer is widely produced and consumed, and also traded alcohol around the globe due to which the young population is attracted to Beer at a high rate which is hampering the Beer Market growth during the forecast period.

The larger segment is predicted to grow at the highest Compound Annual Growth Rate (CAGR) during the forecast period. The growth of the larger segment is attributed to the novel brewing process which offers crisp and refreshing appeal to the consumers and is the most popular Beer throughout the world. The rising trend of the premium sized Beer among consumers has led to the increasing consumption of premium lager in the Beer Market during the forecast period.

Europe is Predicted to Acquire the Largest Share of the Market

Segmentation of the Global Beer Market:

Beer Market to Reach Valuation of USD 915.4 Billion by 2028 - the Rise in the Disposable Income, Growing Number of Craft Breweries, Changing Consumer Preferences, and Emergence of Strong and Flavorful Beers are Driving the Market Growth
In terms of revenue, the Global Beer Market is probable to reach USD 915.4 Billion by 2028, growing at a Compound Annual Growth Rate (CAGR) of 3.5% from 2022 to 2028. The increasing number of social drinkers is expected to increase the demand for Beer Market during the forecast period. Moreover, th...
Read More

What is the global demand for Beer in terms of revenue?