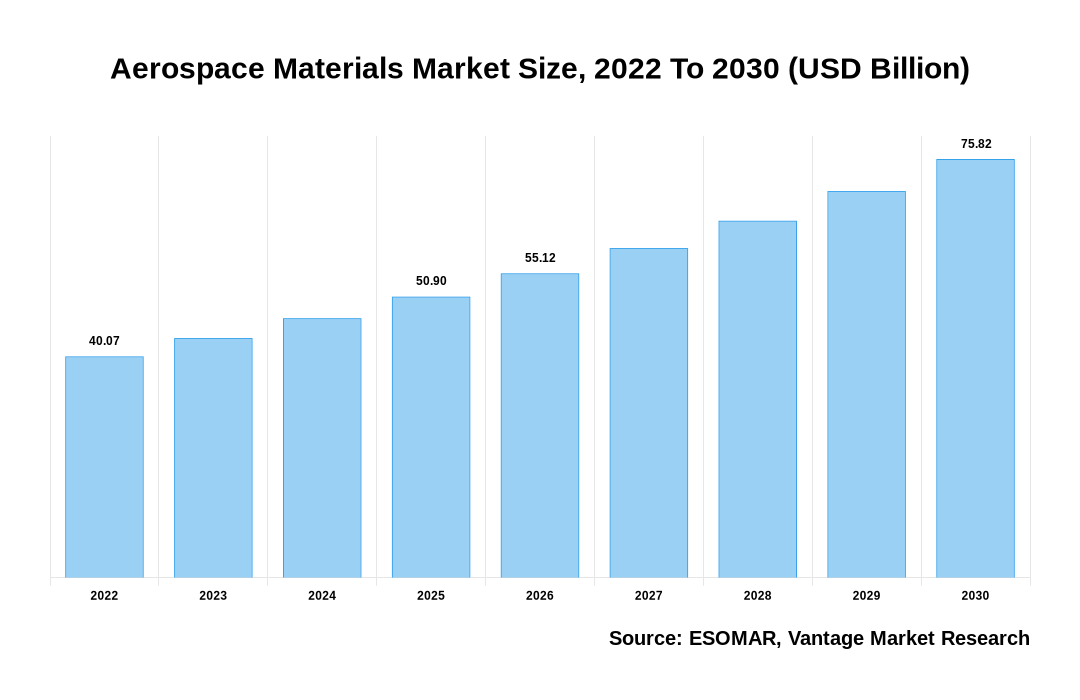 The key factors driving the growth of this market are the increasing use of aircraft for passenger and freight transportation, as well as increasing investments in new aircraft programs. The report forecasts that the demand for new aircraft will increase from 758 planes in 2021 to over 1,500 planes in 2023. The growing global economy also supports the aerospace materials market, encouraging businesses to invest in new infrastructure projects. For example, Boeing has been investing heavily in carbon-fiber technology, which may lead to increased demand for carbon fiber-reinforced plastics (CFRP). The Boeing 737 MAX 8 aircraft was set to enter commercial service in 2020 and is estimated to account for around a third of the global 737 fleets by 2027. The MAX 8 will feature optimized aerodynamics that is expected to result in reduced fuel consumption and emissions, thereby enhancing the sustainability of aviation operations. Airbus has announced plans to develop a new family of airliners—the A330neo—designed to outperform existing models owing to their upgraded aerodynamics and engines. The A330neo is anticipated to be commercially available starting in 2024 and will account for nearly half of all Airbus sales by 2036. Northrop Grumman has unveiled its newest vertical takeoff and landing (VTOL) jet—the X-59A—which can fly at altitudes up to 50,000 feet and reach speeds greater than Mach 2.0. The X-59A is intended for use as a replacement for current military helicopters as well as passenger jets such as the Boeing 737 and Airbus A320 Family aircraft. The use of composites has increased in recent years because they can reduce the weight of an aircraft while also increasing its overall performance. For example, a Boeing 737 jetliner can weigh as much as 800 pounds less than a similar-sized metal airplane, but it can travel at the same speed and reach altitudes that metal airplanes can’t.

The growing demand for aircraft is also attributable to the increasing use of drones and other unmanned aerial vehicles. The growing use of these technologies is expected to drive the demand for aerospace materials, including composites, metals, plastics, and adhesives. One reason the aerospace materials market is projected to grow is that airplanes are becoming more energy-efficient. Manufacturers are increasingly using composites instead of heavy metals such as aluminum to make an airplane lighter and faster. Composite materials are made up of multiple layers of different materials, and they can be designed to meet specific requirements such as strength and stiffness. The stringent government regulations in the aviation sector are restraining the growth of the aerospace materials market. For instance, there is a ban on aircraft manufacturing using certain materials such as carbon fiber composites. Airbus Group has filed a lawsuit against Boeing for US $900 million. The argument between the two companies centers around patent infringements. Airbus claims that Boeing has been infringing on its patents for years, and the company is looking to recoup losses it has incurred. This lawsuit could have a big impact on the aerospace industry.

Additionally, environmental concerns are also restraining the growth of this market. For instance, aircraft emissions are harmful to the environment. They can cause climate change, which has led to a rise in awareness about these issues and is resulting in stricter environmental regulations for the aviation industry.

Over the past few years, the aviation industry has witnessed an increased demand for new aircraft models. The governments of various countries are investing heavily in the development of new aircraft fleets that can meet the growing needs of their respective citizens. Additionally, several airlines are expanding their operations by launching new routes and acquiring new planes. These factors are expected to drive growth in the aerospace materials market over the next few years. Meanwhile, expansions in the global aviation industry are also expected to fuel growth in this market segment. Airlines are increasingly looking for vendors who can provide them with high-quality materials for aircraft construction. This is because airlines want to ensure that their planes remain operational for a long time without any issues. In addition, many OEMs (original equipment manufacturers) are venturing into the aerospace sector, fueling demand for aircraft components and materials from these companies.

Based on Aircraft Types

The growth of aerospace materials market segmentation based on aircraft types from 2021 to 2025 is projected to be highest for military aircraft, followed by helicopters, and then commercial aircraft. Military aircraft are expected to account for the largest share of the aerospace materials market during the forecast period. This is due to the increasing demand from countries such as China and India for military aircraft. These countries are investing heavily in defense capabilities, which is increasing the sales of military aircraft. Helicopters are also expected to grow at a high rate during the period. This is due to the increasing demand from various industries, such as tourism and transportation. These industries rely heavily on helicopters for transporting people and cargo. Additionally, helicopter manufacturers are investing in new technologies that make them more efficient and versatile. This will result in increased demand for helicopters over the next few years. The commercial aircraft market is expected to grow at a slower rate than the other two markets during the forecast period. This is because there is already a large installed base of commercial aircraft in several countries worldwide. Therefore, there is little room for new sales growth in this market segment. The business & general aviation aircraft segment is expected to grow slower than the military aircraft segment in the next five years. This is because this market is more sensitive to economic factors such as inflation and interest rates. Increasing passenger traffic levels are also likely to moderate growth in this segment. Other aircraft types, such as small aircraft, are also expected to grow at a rapid pace shortly. This is due to the growing demand for these aircraft types for transportation purposes.

The North America Aerospace Materials Market is estimated to be the largest at $19.5 billion by 2025, followed by Europe with a revenue of $14.9 billion and the Asia Pacific with a market size of $11.5 billion. The major factors driving the growth of the North American aerospace materials market are technological advancements in aircraft construction and an increase in demand for new aircraft types, such as regional jets and large commercial planes. Latin America is estimated to have the smallest market size of $4.9 billion by 2025. The Middle East & Africa region is projected to grow slower than Latin America.

Aerospace Materials Market to Reach Valuation of USD 61.1 Billion by 2028 – Rising Need for Lightweight and More Fuel-efficient Aircraft Drives the Market
In terms of revenue, the Global Aerospace Materials Market is expected to reach USD 61.1 Billion by 2028, growing at a CAGR (Compound Annual Growth Rate) of 8.5% from 2022 to 2028. The demand for lighter and more fuel-efficient aircraft is one of the reasons propelling the growth of the worldwide ...
Read More

What is the global demand for Aerospace Materials in terms of revenue?