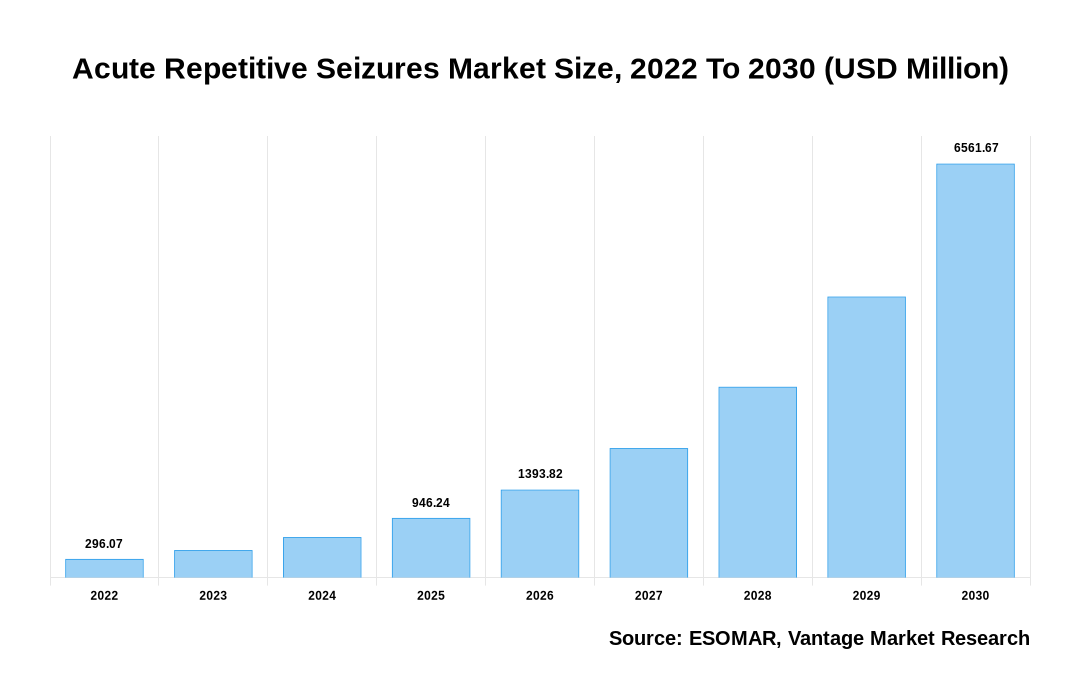 Global Acute Repetitive Seizures Market is valued at USD 201.2 Million in 2021 and is projected to attain a value of USD 998.1 Million by 2028 at a CAGR of 47.5% during the forecast period, 2022–2028. High unmet clinical needs for patients and caregivers, as well as the availability of an advanced product pipeline, are projected to drive market growth. The majority of people with cluster seizures respond well to drug therapy. Outpatient care options, such as clinics and home healthcare, are being used by governments around the world to reduce hospital stays and on-site patient treatment costs in an effort to reduce healthcare spending. These healthcare reforms are increasingly being implemented in emerging economies such as India and China. The market for Acute Repetitive Seizures is predicted to expand as a result of this factor.

Patients prefer the intranasal route over other types of pharmaceutical administration, such as buccal, rectal, and intramuscular routes. Outpatient treatment with parenteral drugs has proven to be the best option. Caregivers are not qualified to administer parenteral drugs in several countries, such as the Netherlands.

The expanding number of clinical trials, increased emphasis on the launch of novel medications, and strong demand for nasal sprays for the treatment of epilepsy are all driving revenue growth in the global Acute Repetitive Seizures market. Furthermore, during the projection period, the Acute Repetitive Seizures market is expected to rise due to a rising number of supervisory approvals and promising treatments in the pipeline.

In addition, governments are consistently seeking to reduce hospital stays and on-site treatment expenses through outpatient care models such as home healthcare and clinics in order to cut healthcare spending. Developing nations, such as China, are rapidly implementing such healthcare reforms, which is projected to fuel the Acute Repetitive Seizures market's rise in the near future.

Lack of Knowledge of Seizures

Several negative aspects are hampering the growth of the worldwide Acute Repetitive Seizures market. The dearth of understanding about seizures is one of the most significant treatment problems. The absence of competent health care services, more expensive treatment alternatives, the lack of emergency treatment, and the distance between health care facilities all compound the problem. Furthermore, patients prefer intranasal administration to other methods of pharmacological administration, such as buccal, rectal, and intramuscular. The best treatment option has found to be outpatient treatment with parenteral medicines. Furthermore, in some countries, healthcare staff are not qualified to administer parenteral medications. Furthermore, those who suffer from neurological illnesses are often ignorant of new treatments. Above mentioned factors might hamper the Acute Repetitive Seizures market growth.

The Global Acute Repetitive Seizures Market can be segmented by product type, into USL-261, NRL-1, AZ-002, Diastat Rectal Gel and Others. Based on Region, the Market is segmented into North America, Europe, Asia Pacific, Latin America and Middle East & Africa.

Due to its efficacy and the absence of FDA-approved medications on the market, Diastat Rectal Gel lead the product segment in 2020. It is the only FDA-approved medication, and generic versions were released in 2010. Over the projected period, NRL-1 is expected to be the fastest-growing segment. It is a Neurelis-developed experimental medication for adolescents, children, and adults. In September 2018, the business submitted an NDA to the FDA. The market for USL-261, which is specifically intended for intranasal administration for outpatient usage, is likely to increase significantly over the next few years.

With the biggest revenue share among regional markets in 2020, North America emerged as the largest market for Acute Repetitive Seizures. The presence of a big target audience for epilepsy drugs is primarily responsible for the Acute Repetitive Seizures market's revenue growth in North America. Because of increased investment in neurology research and development and rising demand for epilepsy medications, the Acute Repetitive Seizures market in Europe is expected to rise strongly in terms of value over the forecast period. In addition, breakthroughs in the scientific, therapeutic, and medical fields would help to increase growth. Simultaneously, government efforts aiming at enhancing quality of life and raising disease awareness, as well as the promotion of better healthcare facilities, are being implemented.

Acute Repetitive Seizures Market to Reach Valuation of USD 998.1 Million by 2028 - Increasing in Launch of New Advanced Treatments Is Driving the Market
In terms of revenue, the Global Acute Repetitive Seizures Market is expected to reach USD 998.1 Million by 2028, growing at a CAGR of 47.5% from 2022 to 2028. An increase in the number of clinical trials has led to the launch of new treatments, and the rise in demand for nasal sprays for the cure of...
Read More

What is the global demand for Acute Repetitive Seizures in terms of revenue?