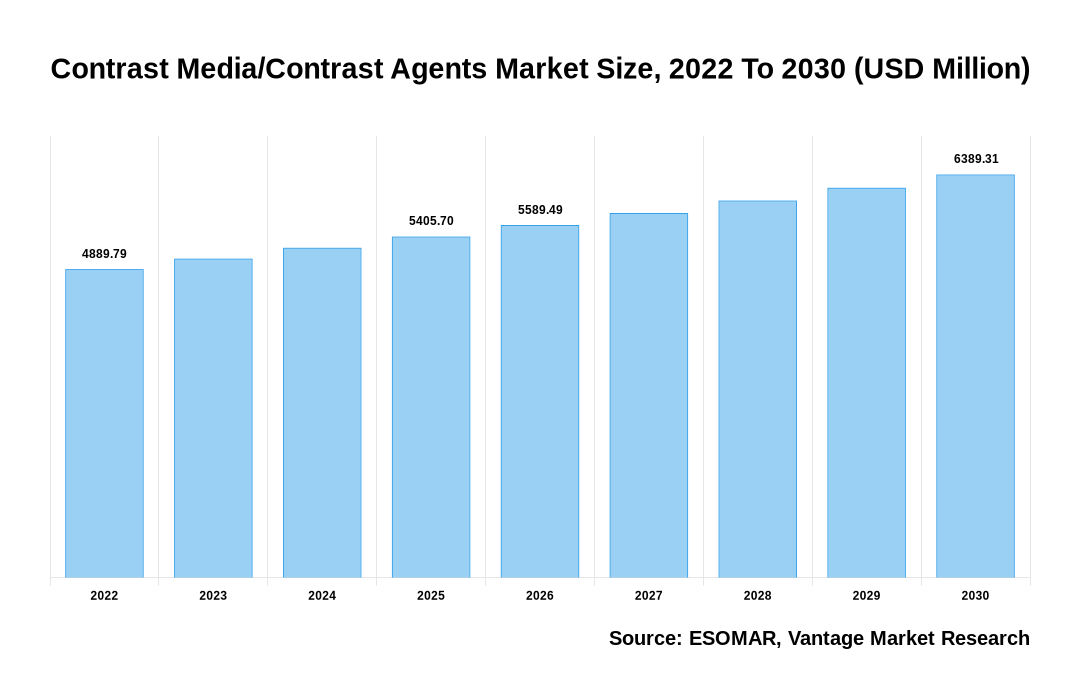 A key factor behind the upsurge in demand for contrast agents is the increased prevalence of cancer, cardiovascular disorders, and neurological diseases. Improving medical infrastructure, rise in adoption of advanced diagnostic systems in hospitals and diagnostic centers, along with the increasing number of ultrasounds, MRI, and CT examinations are expected to augment the target market growth to a significant extent. Furthermore, increasing focus on developing novel and cost-effective contrast agents, coupled with increasing initiatives and funding by various public and private organizations are expected to boost the target market growth in the next coming years.

Iodinated Contrast Media segment accounts for the largest share of the Contrast Media/Contrast Agents Market, which is attributed to the growing number of angioplasty procedures performed globally.

In MRI, contrast agent reduces the relaxation time of nuclei in the body tissues to modify the contrast in image. Gadolinium is used as a contrast agent in MRI. In the 3+ oxidation state, metals have seven unpaired electrons, which cause the water around contrast agent to relax rapidly, improving the quality of MRI scans. MRI Contrast Media is widely used to enhance and improve the contrast difference between normal and abnormal tissues. It may be administered intravenously or orally.

Cardiovascular disease accounts for the largest market share and highest growth rate in the target market in the next coming years. Increasing geriatric population and increasing prevalence of cardiovascular disease globally are factors expected to proliferate growth of this segment in the Global Contrast Media/Contrast Agents Market.

North America market is projected to dominate the Global Contrast Media/Contrast Agents Market over the forecast period, followed by Europe. This can be attributed to growing geriatric population, high prevalence of chronic diseases, and growing popularity of minimally invasive procedures, and the presence of prominent players in countries in the region.

What is the global demand for Contrast Media/Contrast Agents in terms of revenue?