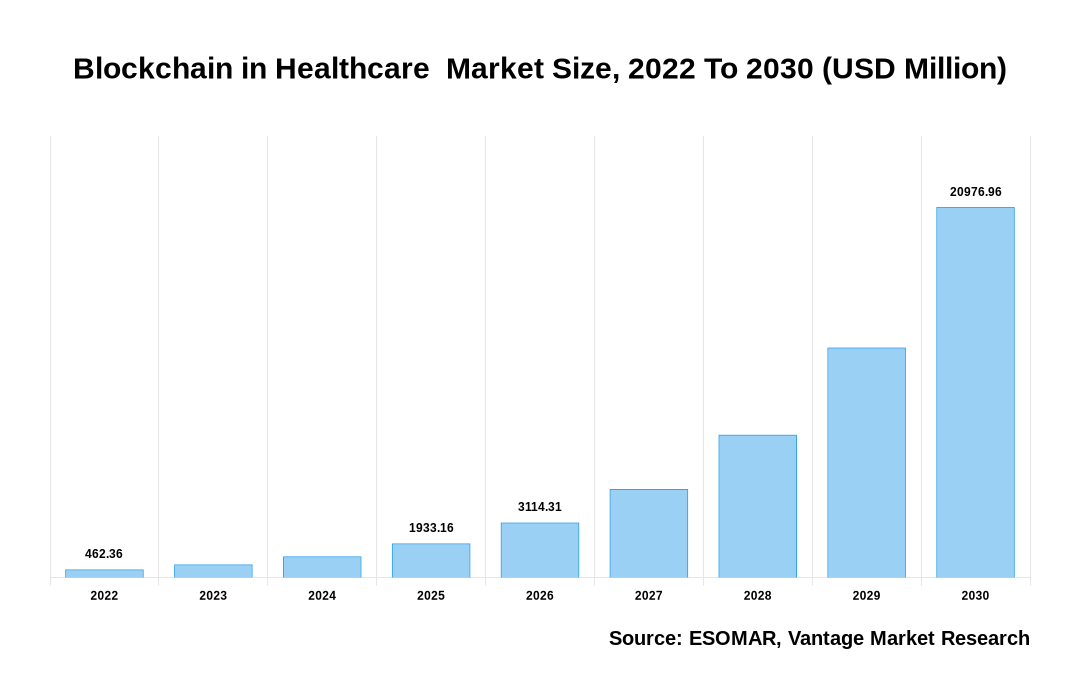 Global Blockchain in Healthcare Market is valued at USD 287.9 Million in 2021 and is projected to attain a value of USD 1,189.8 Million by 2028 at a CAGR of 61.3% during the forecast period, 2022–2028. The market's growth can be ascribed to the rising occurrence of data leaks and breaches, as well as the growing need to address these concerns. The implementation of the technology is being driven by strategic actions by key players, a high demand to prevent medicine counterfeiting, and the necessity for effective health data management systems. In addition, increased investment in the development of efficient healthcare record systems, wearable device cryptography, and medical examination systems is expected to give profitable prospects in the near future for Blockchain in Healthcare industry. The rising prevalence of diseases is predicted to generate a large volume of data, increasing the requirement for data management.

The COVID-19 pandemic emerged as an unprecedented public health threat, infecting a large number of people all across the world. The pandemic caused economic and financial harm to the world economy and a number of industrial sectors. Several countries declared national emergencies and implemented lockdowns to stop SARS-CoV-2 from spreading and infecting people. In the United States, clinical research and surveys have revealed a decrease in outpatient and emergency medical care. Many medical practises, particularly elective medical practises, were impeded, sidetracked, postponed, and halted, affecting industry growth. The coronavirus outbreak, on the other hand, has accelerated the adoption of emerging technologies in healthcare, including blockchain technology.

The lack of awareness about distributed ledger technology and its application in the healthcare industry has been a key impediment to the expansion of blockchain technology. The benefits of this innovative technology and how it works remain unclear to end users in the healthcare industry. Companies may be hesitant to invest in this rapidly developing technology as a result of this. In its current state, blockchain technology is a huge, uncharted territory with a bleak future. Its potential for revolutionising company operations has yet to be realised by investors, the general public, and entrepreneurs.

Blockchain is based on cryptographic algorithms that run on a distributed network of computers. As a result, solid technical knowledge of the relevant technology is required to fully appreciate the blockchain's benefits. One of the most significant barriers to blockchain adoption is a lack of understanding and public awareness. With the growing popularity and use of distributed ledger technology, understanding blockchain will become increasingly important in the future. As a result, platforms to providing instruction in this subject will be established and spread. However, because the practicality of implementing decentralised cryptosystems is beyond the usual IT development skillset, legacy infrastructure difficulties will continue to be an impediment.

Europe to Continue Dominating the Blockchain in Healthcare Market

Due to many government programmes aimed at preventing data breaches, Europe had the largest market share. For example, the EU government implemented the General Data Protection Regulation (GDPR) in 2018. (GDPR). GDPR implementation, together with the massive expansion of blockchain technology, is projected to give businesses in the region with new chances. Over the projection period, North America is expected to hold the second-largest market share. The main driver of regional expansion is rising demand for medical record security.

While the healthcare sector in the United States is investing more in creating technologies, problems with electronic medical records (EMR) are also on the rise. As a result, big players and other healthcare organisations are investing in the blockchain sector to meet the growing demand for safe, secure, and managed data sharing between enterprises.

Some of the players in the Blockchain in Healthcare Market include IBM Corporation, Microsoft Corporation, Gem, Patientory Inc., Guardtime Federal, Hashed Health

Blockchain in Healthcare Market is segmented as follows:

Blockchain in Healthcare Market is tabulated as follows:

Blockchain in Healthcare Market Projected to Reach USD 1,189.8 Million by 2028
The Blockchain in Healthcare Market is expected to reach USD 1,189.8 Million by 2028, growing at a Compound Annual Growth Rate (CAGR) of 61.3% from 2022 to 2028. Factors such as the rising threat of counterfeit drugs, the rising development in Blockchain as a Service (BaaS), growing incidences of he...
Read More

What is the global demand for Blockchain in Healthcare in terms of revenue?